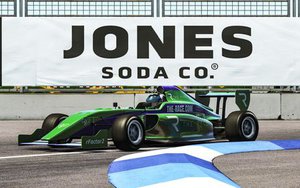 When spectator sports virtually disappeared with the emergence of the pandemic, youth-oriented specialty soft drink maker Jones Soda faced uncertainty about the fate of  its marketing involvement with skateboarding events, such as the Vans Parks Series.

The company is attempting to hedge its bets on live sports with inroads into esports, another big area where Gen Z consumers who may not be into “major” sports hang out. The COVID-19 crisis has turned gaming into a good place for Jones to let itself show off its products.

As viewers watch, it’s hard to miss the Jones Soda banners, and hard to unhear the announcers name drop Jones Soda as they describe the action.

The debut event on March 14 drew 12.1 million minutes watched on the race’s YouTube channel. That led to almost  30,000 combined comments and millions of impressions on social media.

The simulated races draw from superstars from the various racing categories, like NASCAR, IndyCar, Formula E and so on.

Jones seems to know how to pick its spots. In the 1990s it was a sponsor for Tony Hawk and Bam Margera before they became superstar skateboarders and pop icons. In 2003, it created a marketing campaign around--of all things--the 35th anniversary of Hot Wheels.

“We have embraced and grown through guerrilla marketing for 20 years, promoting primarily at skateboarding and other live action sports events,” saysMaisie Antoniello, vice president of marketing at Jones Soda, in an email exchange with Marketing Daily.

“Pivoting to virtual racing gives us a practical way of reaching the young sports-minded demographic that we’ve always courted at a time when live and live-televised sports events are not available.”

Jones is a quirky company that started in Vancouver, Canada in 1996 and later moved to Seattle. One of its claims to fame is that it uses pure cane sugar, and the other is its weird flavors that these days include Blue Bubblegum, and something called Fufuberry. And who can forget Turkey and Gravy Soda, a special Jones flavor from a while back.

Antoneillo bristles at the suggestion by Marketing Daily that  Jones isn’t widely available, pointing out its deals with Walmart and Kroger’s.

Another quirk is that its labels are black and white, but mainly photographic. At first the photos came from photographer Victor John Penner. Then consumers started sending in their own, and now Jones regularly switches out labels to accommodate them.

Very regularly, in fact: “I don’t have a historical count, but our labels are changed every few months  so it easily numbers in the tens of thousands,” Antoniello says.  “We have collected over two million photos in our gallery.”

Antoniello says, “We’ve recently made strong investments in sales and marketing with the goal of scaling Jones for growth, and we are currently proceeding as planned.”

She reasons that, “As for driving sales, brand awareness is always the first step, and that’s certainly helped by in-game integration like large Jones banners placed in the virtual racing track and race announcers mentioning our products.   These are great ways to connect with a captive audience of sports fans stuck at home looking for something to watch. We can’t offer [soda] samples, but that’s out of our control. Like everyone else, we’re having to adapt.”