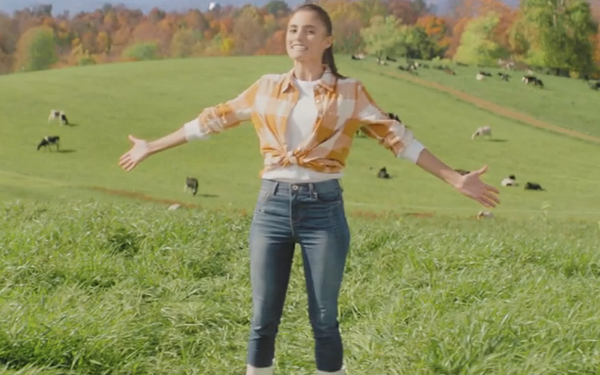 Organic Valley’s new “From Outside With Love” multimedia campaign is an attempt to simplify confusing health claims and highlight the farmer-owned dairy co-op’s standards of animal care.

At the campaign’s center is the idea that cows not kept in confinement but allowed to graze outdoors are happier and healthier—and thus produce better milk.

Separate spots from the Humanaut agency for Organic Valley’s whole milk and grass milk—the latter from cows fed grass instead of grain—feature a peppy young woman high above a company farm extolling a secret ingredient.

“Well, here it is!” she exclaims while spreading her arms wide. “It’s right here. It’s outside!”

The video cuts to a breakfast table where a boy asks, “So we can put outside on our cereal?”

The campaign is the culmination of “months of consumer research into what people think about when they buy dairy,” David Littlejohn, founder and chief creative officer at Chattanooga-based Humanaut, tells Marketing Daily. “Understanding all the claims of the dairy aisle can be difficult, but we were able to distill all of the advantages of Organic Valley down to one word: outside.

“More time outside literally is the ‘ingredient’ they put inside all their products.”

The need for brands to do a better job of communicating the terms “organic” and “natural” dovetails with new research from The Hartman Group. The company found that “a growing core of more engaged consumers is starting to demand more as they look for assurances in farming and production cues that go beyond organic.”

Conducted in January, the online survey of 2,289 U.S. adults who are primary household grocery shoppers noted that trust in the USDA Organic seal remains high—at more than half of respondents.

But despite positive consumer associations with the term “natural,” only 25% see it as a trustworthy claim. Most recognize that its use on food and beverages is not regulated.

Organic claims across the U.S. food and beverage spectrum the have declined by a compound annual growth rate of just around 1% for the period from 2016 to 2019, according to global research provider Innova Market Insights.

“Organic dairy has been able to sidestep this downdraft, with launches growing at a compound annual growth rate of 9.4% for the period from 2016 to 2019,” notes Tom Vierhile, Innova’s vice president of strategic insights for North America.