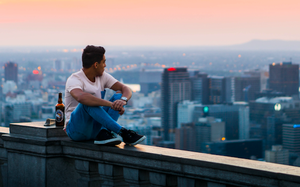 Image by Warren Wong on Unsplash

Alcoholic beverage sales boomed by 55% in the third week of March, compared to a year ago. Hard liquor sales were up 75%. Wine was up 66%. Beer was up 34%. And spiked seltzers, which last year were just emerging as a strong sales force, were up an astounding 456% year-over-year for the week of March 21.

What Americans couldn’t grab off the shelves before most stores closed, they’ve snapped up online. According to Nielsen research, online alcohol sales are up 243% over a year ago.

In a nutshell, since the crisis hit, with restaurants and bars relegated to takeout, Americans have stocked up plenty.

(And not just on alcohol, it should be pointed out. Nielsen reports baking yeast continues to have the top week-over-week growth, with sales up 456.7% for the week ending March 28, compared to a year ago.)

But maybe the wine, liquor and beer bottles are right next to the excess rolls of  oilet paper in everyone's pantry.  Danny Brager, vice president of beverage alcohol and cannabis practices for Nielsen, told an industry webinar last week that a lot of that increase is to build up a stockpile at home -- so sales could start to slow down.

Indeed, for the week of March 28, total alcohol sales increased 22%, still very healthy -- but less than the week before.

According to Wine Business.com, here’s how Brager summed up the increase in volume at a webinar sponsored by the Wine Market Council:: “It’s not just huge, it’s stunning,” he said, adding that sales are “likely running well ahead of consumption.”

Wine sales were up 66% from a year ago, for the week ended March 21, and Brager told the webinar audience there was no location nationwide where wine sales increases were less than 40%. The week before that, sales were up 28%, indicating that consumers were becoming aware the virus was the real, awful deal.

Still, consumers now may have enough in reserve. And according to Wine Business's account, sales bumps will likely change as more consumers lose jobs or otherwise fear for their household income.

Along with the huge bump in sales -- akin to alcohol beverage sales for Christmas and Thanksgiving -- the pandemic may have been the event to turn buying wine online from a rare occurrence into a familiar transaction, a trend likely to remain after the crisis abates.

One alcohol category that is out of step with the boom in sales? High-priced champagne. Brager told the Wine Council webinar, “Celebrations might not fit the current environment right now.”