Just In Time For The Pandemic, Netflix Scores With 'Tiger King' 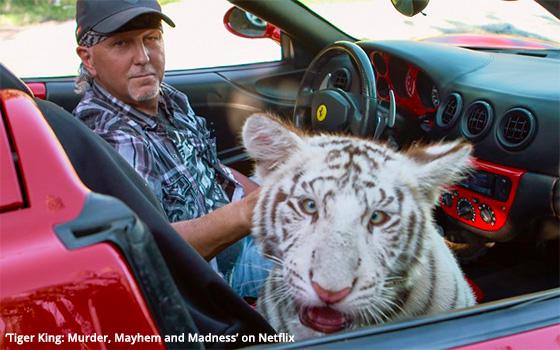 One of the thoughts that occurs to me every time I embark on watching another episode of “Tiger King” is a question: Why or how did this docuseries end up at Netflix?

The obvious answer probably has to do with money and other incentives that are part of the deals Netflix offers producers and content owners.

Much has been made in the business and trade press of Netflix’s deep pockets when it comes to paying top dollar for content. The company seems to make offers that few can refuse.

But other giant media companies have great piles of money too. “Tiger King” might have felt right at home on any number of TV networks or streaming services -- Discovery, NatGeo (Disney), HBO (WarnerMedia), Showtime (ViacomCBS) and more.

Some observers have noted that in its basic outline and style, it is not that unlike a lengthy “Dateline” or “20/20.” Those shows are always crime-oriented, and they sometimes deal with outlandish characters.

“Tiger King” tells the story of a group of self-styled big-cat enthusiasts who maintain private zoos filled with lions, tigers and other large animals that are now more numerous in captivity than they are in the wild.

But it is also true that some of the more earthy aspects of “Tiger King” would have been incompatible with any advertiser-supported TV network.

Still, it would not be surprising to learn some time down the road that other networks heard a pitch for “Tiger King” and turned it down, only to regret the decision now that it has become something of a binge-watching phenomenon during the current pandemic.

Certainly, all hindsight is 20-20 (no pun intended). And no one in the TV business was capable of seeing so far ahead that they could have planned to have a docuseries such as “Tiger King” on hand just in case the entire population of the United States was suddenly required to stay inside, where they would while away the hours watching TV.

Netflix was lucky enough to have it, though. New research from Nielsen reveals that “Tiger King” is a lion-sized hit. To cut to the chase, “Tiger King” has emerged as the biggest hit for Netflix since season three of “Stranger Things,” according to Nielsen’s Subscription Video on Demand Content Ratings.

Comparing the two shows’ performances in the first 10 days that they were available on Netflix, Nielsen finds that “Tiger King” drew 34.3 million unique viewers over that 10-day period (March 20 through March 29 of this year), while “Stranger Things 3” -- the most successful show in Netflix history -- had an audience of 36.3 million unique viewers in its first 10 days (July 4 through July 13, 2019).

“While the timing for this Netflix release coincided with a global pandemic and a myriad of social distancing mandates, when ‘Tiger King’ dropped on March 20, it had a rather inauspicious launch achieving an average minute audience of 280,000 U.S viewers 2 years-old and older (P2+) and reaching 741,000 consumers (P2+),” Nielsen said in a news release this week

“Tiger King” is a great success, but why this show, and not a dozen others? Or to put it another way, what has made “Tiger King” so attractive to so many?

Sometimes, there is no obvious answer to such questions. Perhaps this show came along at just the right time -- an eye-catching, Velcro-like TV show (like the proverbial trainwreck) that is providing an escape for a viewing audience that is literally being held captive in their own homes.

The TV Blog concedes that “Tiger King” is a high-quality production. But so are many other TV shows on odd and eccentric people and subjects. For this one, timing seems to be have been almost everything. In other words, luck had a lot to do with it too.