No One's In Their Car Much Now, So SiriusXM Offers Free Sample Of Its App 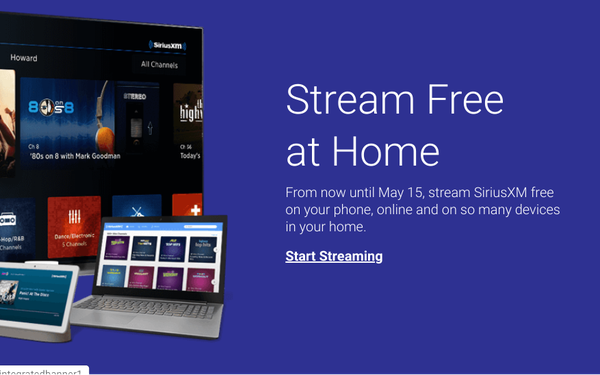 Of all the businesses thrown off-kilter by the COVID-19 pandemic, it would seem SiriusXM deserves some special sympathy.

As a pay radio service, it depends on subscribers (it has 35 million) and a place for them to listen, namely an automobile -- 120 million vehicles have SiriusXM.

But the virus now keeps millions off the road. They are suddenly unemployed or working from home.

And the SiriusXM pipeline to new customers is tanking, too. The new car business is slumping badly. SiriusXM gives car buyers a free short-term subscription that, often enough, turns into a paying subscription later on.

Sirius is now taking steps to keep people interested, and turning to the home -- where the company has already been working to grow its listenership -- to do it. It's offering free service for its app until May 15.

“With so many people asked to stay at home, we are making our full streaming lineup of music, entertainment, news and information easily accessible to everyone,” said Jim Meyer, the CEO, in a statement he made March 31. “In the days ahead, we hope it's a valuable source of information or diversion, a generous mix of fresh live content, and a source of companionship that comes from the hosts on our many shows and channels.”

The free app offer gives listeners access to more than 300 SiriusXM channels (yes, Howard Stern included). SiriusXM has also added a special version of its Doctor channel, now all all about answering listeners’ questions re the virus, and #StayHomeRadio, a music service intended to serve that new crowd.

SiriusXM’s natural competition is conventional radio. Nielsen research reported March 26 that maybe things aren’t so bad for radio, after all.  Its survey shows  83% of consumers are listening to more or the same amount of radio as they did prior to the crisis -- 28% more, while 55% listen to the same amount.

The survey says 26% are listening more in their home. But it says 32% report they’re listening less in their car -- probably because they’re not in it.