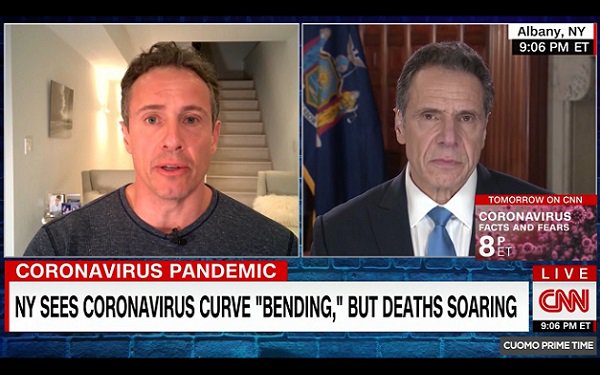 Two commentaries in high-profile places last week took issue with aspects of the ways in which President Trump and New York Gov. Andrew Cuomo have been appearing on TV during the COVID-19 pandemic.

For Trump, the commentary came from The Wall Street Journal last Thursday and Friday. The paper criticized the president for seizing the spotlight during the daily news briefings of his White House Coronavirus Taskforce.

For Cuomo, the commentary came from a New York Post columnist who criticized the governor's nightly appearances on brother Chris Cuomo’s prime-time show on CNN.

The Post did not criticize Gov. Cuomo's daily news conferences that have been airing live earlier in the day during the pandemic.

For the first few weeks of the pandemic, President Trump drew praise from some quarters for his daily televised briefings in which he projected an image of calm, openness, responsibility and industriousness in marshaling the resources of the government.

In the process, he also appeared to cede the spotlight to some of the more-expert members of his Coronavirus Taskforce -- behavior that is not exactly a trait most people would associate with Donald Trump.

But more recently, he has been monopolizing these overlong daily briefings in order to carry on inane verbal sparring matches with members of the press corps.

In the lead editorial on its opinion pages last Thursday, The Wall Street Journal took Trump to task for these news-briefing defects and more.

“The briefings began as a good idea to educate the public about the dangers of the virus,” the WSJ wrote. “But sometime in the last three weeks, Mr. Trump seems to have concluded that the briefings could be a showcase for him. … The briefings are now all about the President.”

“The President’s outbursts against his political critics are notably off key at this moment,” the editorial continued. “This isn’t impeachment, and COVID-19 isn’t shifty Schiff. It’s a once-in-a-century threat to American life and livelihood.”

Would the president take the editorial to heart and make some of the changes that the WSJ editors suggested? As the week came to a close, that did not seem likely.

In a shorter editorial on Friday headlined “All the President’s Ratings,” the paper noted that the president responded by bragging about his ratings on Twitter.

“The Wall Street Journal always ‘forgets’ to mention that the ratings for the White House Press Briefings are ‘through the roof’,” tweeted the leader of the free world. “WSJ is Fake News!”

“Thanks for reading, sir,” the editorial said on Friday. “Our point was about the way Mr. Trump is communicating about a subject that is literally a life and death matter. That’s the reason they’re a ratings hit, not because people enjoy Donald Trump sparring with the White House press corps like a Packers-Bears game.”

Meanwhile, Gov. Cuomo has drawn praise for weeks for his communications style in the daily news briefings he has held on TV since the crisis began. In the briefings, he comes across as empathetic, realistic, open, honest, thoughtful, philosophical and wise.

The tone appears to be exactly what many people need to hear, and almost overnight he has seen his popularity rise steeply, not only in New York but nationwide.

But at the same time, New York emerged as the world center of the pandemic. New York Post columnist Kyle Smith pointed out this disconnect in a Friday morning column on the Post website that was headlined: “Stop the sickening ‘Cuomo Brothers Feel-Good Pandemic Variety Show’.”

Smith's main point was his opinion that Chris Cuomo demeans himself, CNN and all of journalism by welcoming his own brother on to his show every night to ask him brotherly softball questions that he would never ask any other newsmaker.

For Smith, having Cuomo interviewing Gov. Cuomo is like hiring Donald Trump Jr. to interview his father every night on Fox News -- which, it should be noted, not even Fox News has done.

Smith was evidently fed up with Chris Cuomo presiding over a nightly lovefest in which he thanks his brother incessantly and tells him how much he loves him.

“Gov. Cuomo reports that our state now has more people infected with coronavirus than any single entire country,” Smith wrote. “ ‘I love you very much’ and ‘Thank you’ are not the top two things I would say to a guy who has presided over a catastrophe that has killed more than 7,000 New Yorkers.”