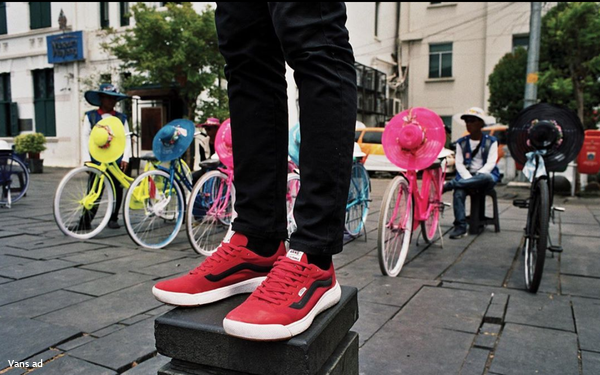 Piper Sandler’s latest report on teen spending is just out, showing a 13% decline from last year’s spring survey. Spending is also down 4% from the fall survey, to $2,300, marking the lowest level of kids’ cash outlays since the fall of 2011.

All categories declined, says Erinn Murphy, an analyst with the Minneapolis-based firm and lead author, except for one: boys’ shoes.

Murphy tells Marketing Daily that teenage girls’ annual spending on shoes has been flat. But for boys, it’s climbed from less than $200 15 years ago a year to $334.

“That’s up 70% over 15 years,” she says, chalking it up to the steady growth of sneaker culture, which she thinks will soon gain favor with young women, too. Nike continues to be the No. 1 shoe brand for both sexes, followed by Vans, Adidas and Converse.

And in the uncool category, Under Armour leaps to No. 1, named by 23% of boys as a brand they don’t wear anymore, and 4% of girls.

The survey, the company’s 39th, is based on responses from 5,200 teens in 41 states, with the average age of 16.2. It included several weeks when many had been confined at home because of the COVID-19 pandemic.

And while stay-at-home culture impacted some of the results -- like TikTok making its debut in the social media category at No. 3 -- Murphy says many of the results are simply accelerations of trends well underway before the virus sent millions of teens home from school.

Among those trends, food continues to be the focus of teens' attention, getting a 25% share of their self-reported wallets. Handbags matter less than ever, with accessories spending falling to an all-time low in the survey, at $89 per year. And makeup is also less important, with cosmetics purchases hitting a 10-year low.

“Four years ago, more than half of our respondents said they wore makeup every day, and that’s fallen to 32%,” according to Murphy.

Cosmetics spending dropped 26% from last year’s survey, to $103. There is also a shift in where teens shop for beauty products, with Ulta and Amazon continuing to lead, while Sephora is still losing share. Amazon’s private-label makeup brands are also growing more popular.

In fashion, athletic brands are still tops for both boys and girls, with Nike ranked No. 1, and Lululemon coming on strong, moving into sixth place. Ralph Lauren is still iced out of the top 10, and Victoria’s Secret sinks to No. 14.

The survey recently began including a question about causes that matter most, and the environment continues to be a strong No. 1. But COVID-19 came in second, followed by abortion, gun control and racial equality.

When it comes to video streaming, teens say they spend 33% of their daily video time on Netflix, followed by YouTube at 31%. Disney+ debuts at 7%.

Digital identity for this generation seems to increase with each survey, with 85% owning an iPhone, up from 83%. And 88% say their next phone will be an iPhone, another survey high. Smartwatch ownership ticked up too, rising to 31% from 27% in the fall. Apple wins in this category, as well, with Apple Watch ownership up to 25%, from 20% in the last survey.

In terms of style trends, boys still say they like to make a statement with Nike or Jordans, hoodies and athleticwear. And girls are loving their Lululemon leggings, Nike or Jordans sneakers, and crop tops.