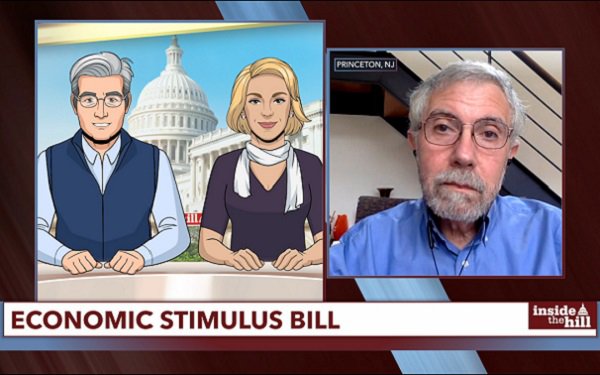 The publicists at CBS All Access insist that the interview subjects who have appeared on CBS AA's new animated TV news spoof “Tooning Out the News” were all aware that they had agreed to participate in an “animated news comedy show” in which they would be interviewed by cartoon characters.

And yet in the interviews seen on the show, these interview subjects keep this awareness well-hidden. They all react to the questions posed by their cartoon interviewers in such a way that it is possible to form the impression that they only half-knew, or thought they knew, what they were in for.

They all react with the straightest of faces as these satirical cartoon news anchors make one silly remark and pose one idiotic question after another.

You can see for yourself. The first episode of “Tooning Out the News” started streaming last Friday, and is available to see for free on YouTube here until noon on this coming Friday (April 17). The show is produced by Stephen Colbert and the team of producers who already make the animated series “The Cartoon President” for Showtime.

In “Tooning Out the News,” Nobel Prize-winning economist and New York Times columnist Paul Krugman, a former professor at both MIT and Princeton who is no slouch in the brains department, seems like he had no idea what he had gotten himself into.

In the segment in which he appears with cartoon co-anchors Richard Ballard and Sarah Sabo (pictured above), he answers their questions about the Trump administration’s coronavirus economic stimulus package as if he is answering questions on the “PBS NewsHour.”

He remains so passive that it is possible to believe that he was not even listening closely to the animated characters’ remarks and questions.

“Let's bring in Nobel Prize-winning economist Paul Krugman,” says the Sabo character to introduce the segment. “He is the author of ‘Arguing With Zombies’ [a true title, and his latest book], available now in Barnes and Noble's condescending nonfiction section!”

Krugman does not noticeably react to this at all. And he seems similarly unaware when his segment is “enhanced” by computer-generated animation such as a dancing gingerbread man who cavorts onscreen beside Krugman as he delivers a serious answer.

Nuzzi, a real-life person, veered closely to satire herself on the basis of the reason she was brought on the show. She recently bylined a story published on New York magazine's website that was actually about Andrew Cuomo's nipples.

Nuzzi and her nipple story felt right at home on this satirical news show populated by cartoon characters.

But perhaps the most unforgettable portion of this episode of “Tooning Out the News” involved a “guest” who was completely unaware of who he was talking to when he agreed to take a phone call from cartoon anchor Smartwood -- Rudy Giuliani.

In a phone call that was confirmed as real by a CBS All Access publicist, Giuliani said yes to an interview when he was cold-called by this voice of a cartoon character.  Giuliani apparently had no idea who this “person” was, but the former mayor of New York is heard (not seen) on the show taking the call anyway.

He is then drawn into a conversation about a false accusation, made up by the show, that Giuliani had damaged some furniture at the cigar-smoking club he frequents in Manhattan, and the club was demanding that he pay for it.

These segments reminded the TV Blog of the old “Ali G Show” on HBO in which the addle-brained title character played by Sacha Baron Cohen somehow got major figures in government, politics and media to agree to be interviewed by him, and he then asked them the dumbest questions he could think of.

“Tooning Out the News” stands on its own, however, as a very clever piece of modern-day media satire. Moreover, the show is designed to be topical and timely. The show that dropped last Friday dealt with the coronavirus pandemic, Bernie Sanders’ announcement that he is dropping out of the race for President and other current topics.

The episode available for watching now is very entertaining. But how could it not be? TV news today is already a parody. A satirical TV show such as “Tooning Out the News” practically writes itself.