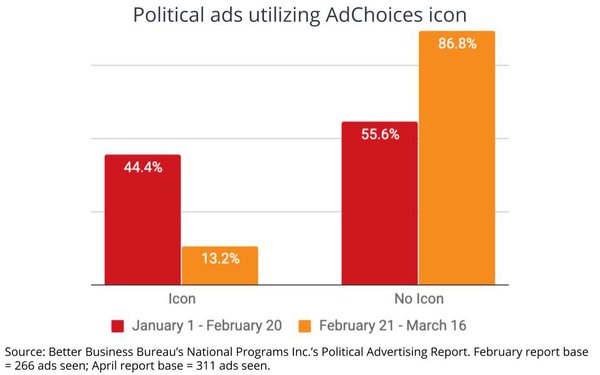 The percentage of national political ads disclosing the ad industry's AdChoices icon has declined from 44% at the beginning of the year to just 13% more recently, according to the second edition of a periodic report from the Better Business Bureau (BBB) National Programs' Digital Advertising Accountability Program (DAAP).

The DAAP, which began promoting and reporting the use of the industry's AdChoices icon to create more disclosure for political ads, describes the reports as a "snapshot," but the second installment suggests compliance is spotty at best.

"Compliance with the Political Advertising Principles’ transparency requirements remains incomplete," the self-regulatory body said in the release of the report, noting only 89% of the political ads it observed in the most recent report "contained some form of enhanced notice—an icon or wording indicating that the ad is a political advertisement.

"Further, 282 (81%) provided some of the information such as the advertiser’s name, contact information, and other relevant data that are called for by" the DAAP's political advertising principles.

The principles require political advertisers advocating for or against a particular candidate to clearly provide enhanced notice of the political nature of the ad in the form of an icon or a hyperlink.

"This enhanced notice must take users to a disclosure that describes who paid for the ad, how to contact them, and links to a relevant database of political ad contributions and expenditures," the DAAP said.