It's Time For A 'Seven Second' Presidential Broadcast Delay 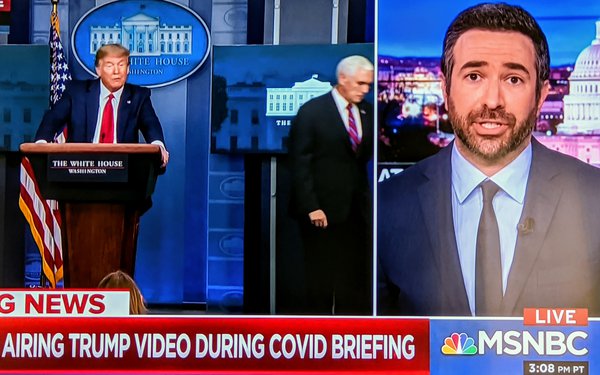 If that wasn’t evident for the weeks leading up to Monday’s “briefing,” it’s abundantly clear after the President ripped into America’s best news media outlets, said they “are all going out of business,” and then launched a three-and-a-half-minute campaign ad trumpeting how purportedly successfully he has dealt with the pandemic to date.

I was stunned at first by the content of the commercial, as I viewed it live. I then became stunned that the news outlet I was watching -- MSNBC -- kept letting it air.

It took MSNBC three minutes and 43 seconds before Ari Melber broke in with he understatement, “We are cutting into what was NOT a White House Coronavirus Task Force Briefing.”

My question is why did it take Melber and his producers so long to realize that the President was pulling one over on them, and milking a national health crisis for political gain. Which is pretty much what he’s been doing most evenings since the crisis began.

It made me wonder why there wasn’t some kind of “seven seconds delay” so TV news producers could censor the President’s campaign messaging the way broadcasters to to avoid inadvertently airing profanity that might otherwise slip through in a live feed.

Better yet, why do the national news outlets air the President’s briefings at all, at this point? Why not just air an edited highlights tape, the way a local TV news sportscaster might. You know, “Let’s go to the videotape.”

Best of all, maybe they should ignore the President altogether at this point, and just report on anything material he actually says, or that the White House actually does? Because the only thing the President is using this precious airtime for is as a replacement for his live campaign rallies: an opportunity to rant and rave, pump himself up, vent his mental disorders, and of course, gaslight America.

I mean, there should actually be a law against the White House using national media for pernicious political activities. Actually there is. It’s called The Hatch Act of 1939. Unfortunately, it exempts the President and the Vice President.

So maybe it’s time for the media stop doing what the President keeps accusing them of: reporting “fake news.” Especially when it’s a free campaign ad.

At least the President got the headline right: 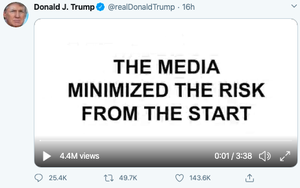 covid-19
12 comments about "It's Time For A 'Seven Second' Presidential Broadcast Delay".
Check to receive email when comments are posted.
Read more comments >
Next story loading