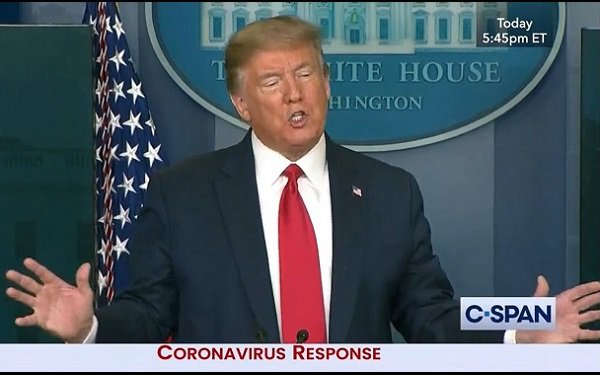 An unusual piece of public relations communication came from CNN Monday night that turned out to be the news network’s response to aspects of the combative press briefing President Trump had conducted earlier in the evening.

This emailed missive from CNN was not a press release, but a list of stories, with embedded links in each of them, that inventoried all of the stories CNN did on the growing threat of the novel coronavirus in January and February.

No reason for this communique was provided until a journalist clicked on the link embedded in this email's headline: “CNN's early reporting on the novel coronavirus: Articles, videos and posts from January and February 2020.”

There, on CNN.com, could be found an explanation for this inventory. “President Donald Trump on Monday falsely claimed the media had ignored the outbreak of the novel coronavirus in January and February, as he sought to defend his response to the pandemic,” CNN said in an introduction to the story list.

The list that followed contained 129 stories in just those two months -- 38 in January and 91 in February.

The timing of CNN's distribution of this list was unmistakable, coming just hours after President Trump held a daily news briefing of his White House Coronavirus Task Force.

The Monday briefing, lasting almost two-and-a-half hours, may have represented the president's strongest words and actions yet in his ongoing campaign of accusing the national mainstream news media of misrepresenting his thoughts, statements and deeds during the pandemic.

Last week, The Wall Street Journal editorial page scolded the president for increasingly devoting these daily news briefings to himself, and how the news media, in his view, continues to impugn and malign his reputation.

So much for the advice and counsel of The Wall Street Journal: On Monday, Trump leveled his most pointed rebukes yet at the White House press corps.

The most conspicuous new wrinkle was a visual aid in the form of a hastily assembled video in which random pundits and media personalities were seen in recent TV appearances praising Trump's efforts in the pandemic fight.

For Trump, this praise montage represented validation that he is doing a great job, and provided evidence that hostile White House correspondents and their networks (such as CNN, for example) are being unfair to him because they are not among those who have praised him recently.

The video played like a project Trump had hastily assigned to an intern about an hour before the news briefing was set to begin at approximately 5:30 p.m. Eastern.

This video's insertion into the initial portions of the news briefing, along with Trump obstinately reading a lengthy, detailed timeline of the actions he took in January to combat COVID-19, gave an air of unreality to the Monday briefing -- even more than usual.

Viewers watching at home had cause to wonder when or if the president would ever get to the information they had tuned in to hear -- case numbers, death rates and a summary of what the task force had accomplished that day to combat COVID-19.

At one point in Monday's news conference, Trump made the jarring declaration that as president, his authority is total.

He may have meant that in the event of national emergencies such as this one, a U.S. president has more leeway in his authority to act than he would at other times. But he did not choose his words well, to say the least.

Clearly, his relationship with some of the major national news media in this country is strained. At Monday's briefing, he lost his patience most notably with Kaitlan Collins of CNN and Paula Reid of CBS.

When Reid pressed him to answer a question about the U.S. relationship with China, Trump told her, “You are probably the last person I'd tell.”

As for CNN’s list of its January and February stories, it is doubtful that word of it ever reached President Trump's ears on Tuesday. CNN need not have hatched this list plan in the first place. Issuing lists like this one is what Donald Trump does. CNN would do better not to play the same games he does.