The State Of TV Today: Remembrance Of Super Bowls Past 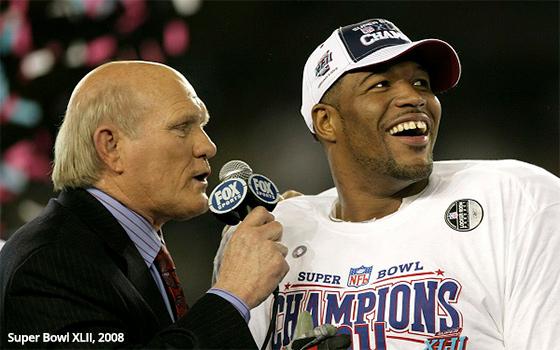 The most conspicuous difference in the TV landscape today during the current pandemic is the lack of live sports.

In second place (if we are to assign subjective rankings to such things) are the many commercials that have been produced for a host of local and national brands that all reference the pandemic and the way it has altered our lives.

These kinds of commercials comprise the vast majority of commercials seen on TV today -- so much so that when one sees commercials that are clearly not in this large group of recently made spots, they feel incongruous and even oddly dated.

Regular TV content (the stuff that was once known as “programming) is still more or less the same as it was before the pandemic. With a very small handful of exceptions, no scripted or unscripted series on TV today have made any episodes since COVID-19 came upon us.

The first-run content being seen on TV today was just about all produced before production shut down in the same manner as other workplaces.

The lack of new production will begin to make itself felt in the weeks and months to come as the networks run out of fresh content. And, as reported elsewhere, production on the new fall television shows this summer is uncertain, and looking more and more improbable with each passing day.

TV news programming seems to have benefited from the pandemic. This is not surprising as millions are craving news of the disease, no doubt with the hope that the news they are tuning in for will be good news about progress in the fight against the disease.

Recently, research reported elsewhere on MediaPost drew a direct correlation between the loss of live sports on TV and an increase in TV news ratings.

The study referenced in the story was very specific in its assertion that millions who would have ordinarily watched hours and hours of March Madness NCAA basketball reverted instead to news programming in the tournament's absence during that month.

Less clear is the extent of the sports viewer's appetite for what has become the bread and butter of our national and regional sports networks -- namely, old games being re-aired all over the place.

Besides the Giants' victory over the Pats, the game was notable as the last one in the career of Michael Strahan (seen being interviewed after the game by Terry Bradshaw in the photo above).

After stumbling on it Sunday afternoon in one of those fallow periods in which our confinement at home was devolving into abject boredom, the game emerged as a very welcome option to the only other activity open to us, which was to do nothing.

More recently, on Tuesday evening, we came across a rebroadcast of a 1991 hockey game on MSG Network (the TV network of Madison Square Garden in New York) in which the New York Islanders were playing the Washington Capitals at Nassau Coliseum.

This held much less interest for us than the 2008 Super Bowl, not least because there was nothing particularly notable about this particular hockey game (at least to us). Perhaps it was an infamous game in the annals of Islanders hockey history.

Another local sports channel in New York has been running old Mets games under the moniker of “Mets Classics.” This prompted one observer to quip the other day that they're going to run out of those pretty soon.

As has been previously remarked upon from time to time here, live major-league sports are TV's premiere attraction, not least because they take up hours upon hours of TV time every day.

Moreover, sports television represents the segment of the TV industry where new technologies and state-of-the-art production methods seem to be adopted with the most eagerness and enthusiasm.

Or to put it another way, football games are exciting, but they are made even more so by the way they are produced and mounted for television. It is a matter of personal opinion, of course, but NFL games represent the best-produced content in all of television.

When all else fails on a typical evening of channel-grazing in which we find nothing of interest to watch, the fallback for us has long been live sports.

In the winter months -- just before the pandemic accelerated and put an end to professional sports for now -- we had long gravitated toward NBA basketball or NHL hockey.

Now, these options are gone except for re-airings of games that are so old in come cases that the videotape they are recorded on is visibly below broadcast quality.

The lack of live sports to watch has become so acute that we even miss the Knicks.