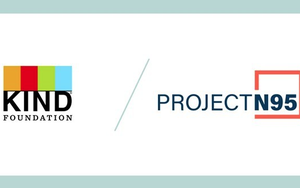 New charitable initiatives by Kind Snacks and Sparkling Ice help to broaden supply chains for healthcare and front-line necessities stretched thin by the pandemic, and urge people to nominate their own hometown hero, respectively.

The new project will source a wide range of resources for healthcare organizations and frontline workers—including food, lodging and transportation—supplementing donated masks, gloves and gowns Project N95 has been supplying to a network of healthcare facilities.

Frontline Impact Project has a $1 million commitment from the Kind Foundation as well as the involvement of the Lubetzky Family Foundation, which was started by Kind founder and executive chairman Daniel Lubetzky. In addition, Kind Snacks said it will donate at least five million of its snack bars for distribution to healthcare workers around the world—one million of which have already been supplied.

“As we began distributing healthy snacks over the last couple of weeks, we realized how difficult it is to deliver donations to hospitals and health care institutions equitably and efficiently. That’s where Project N95 came in,” Lubetzky said in a statement.“While providing protection to thousands of healthcare workers, they’ve developed a qualified network of recipients available to receive immediate support.”

Yesterday, Sparkling Ice from Talking Rain Beverage Co. launched the “Cheers To Heroes” campaign in conjunction with Honor Flight Network, a nonprofit organization that assists U.S. military veterans. It’s a call-to-action effort in which people can nominate “a hero in their life” who has made a difference while on the front lines of the COVID-19 pandemic—with the winner receiving $10,000.

As explained in this video, after June 14, Sparkling Ice will identify the top three heroes, who will be voted on throughout the month of July on its website. The winner will be announced on Aug 7, with the nominator of the winning hero receiving $500.

“I came across Honor Flight about five years ago while I was traveling and witnessed one of their transports,” Talking Rain CEO Chris Hall tells Marketing Daily.  “Being a veteran myself, the mission of Honor Flight Network is very close to my heart and I knew we had to get involved. Everyone most likely has a connection or has been touched by a veteran in some way or other—so it’s important to continue to give back to those who fight for us in addition to those heroes who are on the frontlines of the COVID-19 pandemic.”