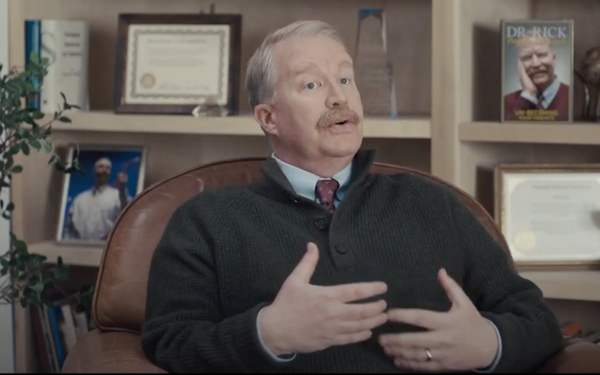 The Farmers spot from RPA focuses on reassuring customers. The insurance company’s COVID-19-related efforts range from giving people a break on their auto policy while they drive less, to extending coverage for delivery drivers, to providing monthly credits to more than 115,000 small-business customers.

“Seeing it Through” features the familiar voice of Professor Burke (J.K. Simmons), who shares that Farmers has helped communities navigate everything from natural disasters to unbelievable claims.

“In 90 years at Farmers, we thought we’d seen it all, from fires and hurricanes to animal antics we could laugh about later. But we haven’t seen this,” he says, as the imagery changes from natural disasters to empty streets and a man wearing a surgical mask.

“So Farmers is reducing auto premiums by 25%, extending payment due dates and expanding coverage for the delivery drivers who are carrying us through. And then we’ll do the next thing, and the thing after that. Until this is another thing we’ve seen and done.”

The company will continue to run that spot alongside two additional ones. All three are from Arnold Worldwide.

Creative for the latter two ads is comedic and continues the previously introduced theme of Parentamorphosis, when new homeowners start acting like their parents. Spots introduce Dr. Rick, a Parenta-Life Coach who has dedicated his life to fighting Parentamorphosis.

The first of the two spots, "Field Work/Pillows," airs through the week of April 27. The second, "Group Outing," will debut June 1. The company also created a short mockumentary trailer about Dr. Rick.

The decision to go ahead with humorous spots was not made lightly, says Progressive CMO Jeff Charney.

“We're very sensitive to how COVID-19 has altered the lives of so many around the world, and doing the right thing remains vitally important to us,” Charney tells Marketing Daily. “We put our immediate focus on our customers, employees, agents and communities, as you saw through the Apron Relief spot we launched last week. At the same time, we know people often crave some levity, and quite simply, just want to be entertained.”

The best way to provide that is to give them something “funny, but true” that they can easily relate to—for many, that’s their parents, he says.

“Stay tuned and you’ll understand a bit more about the true power of Dr. Rick, with a quote from his new book, 'Un-Becoming Your Parents,'" Charney says. "In chapter three, titled 'There’s No Place Like Home … With Your Parents?' Dr. Rick says, ‘Just because you have to be home right now, doesn’t mean you have to become your parents.’”