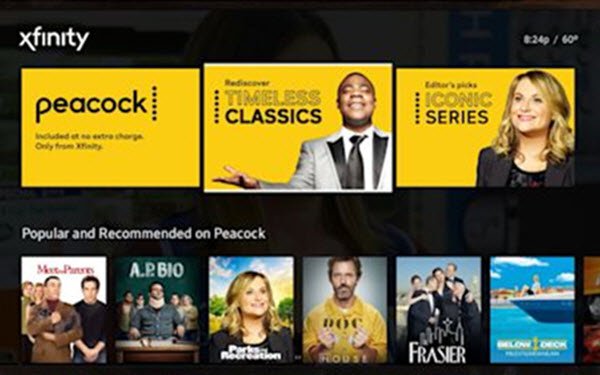 Comcast’s launch of its Peacock streaming service during the pandemic is a plus on the consumer side, but potentially challenging on the advertising side, in the view of Craig Moffett, founding partner of analyst firm MoffettNathanson.

“It’s the best of times and the worse of times for a streaming service,” Moffett said on CNBC’s “Squawk Box.”

“On one hand, we’re all home and there’s a ton of consumption,” he said. “You see that in the data traffic patterns: Peak hours are still at the streaming times, [around] 9 pm, when people are watching entertainment — not during the work day. We’re consuming a ton of entertainment, a ton of news. And all of that bodes really well for Peacock.”

On the other hand, “because Peacock, unlike most of the other streaming services, is ad-supported, [its] real audience is advertisers — and advertisers have gone on strike,” Moffett said. So the timing is “very good for the demand side — [Peacock will] get lots of viewers — but it’s going to be a tough uphill climb to get advertisers.”

Moffett — who was speaking on April 14, the day that Peacock was launched to Comcast customers (its full launch is scheduled for July, but might be moved up) — made made no reference to comments made the day before by Matt Strauss, chairman of Peacock/NBCUniversal Digital Enterprises.

Strauss said that NBCU sees no “degradation” in “the targets that we have laid out with our advertising sponsors” as a result of the pandemic; that the deals are “longer-term” in nature; and that advertisers are “wanting to work” with NBCU/Peacock, particularly in light of the current upsurge in streaming usage.

Peacock’s initial sponsors are Capital One, L’Oreal USA, Molson Coors Beverage Company, Subaru of America, Inc., Verizon, Eli Lilly and Company, Apartments.com, State Farm, Target, and Unilever. Each of those deals, which reportedly run for 18 months, has been estimated to be worth about $15 million to $25 million.

But Moffett may have been projecting about building on that advertiser base in the post-pandemic environment.

“The hope is that Peacock will be one of the streamers that comes out the other side of this with a large group of committed customers, and eventually it will be much easier to sell advertising against [those] customers,” he said — emphasizing the “commitment” factor.

“I don’t think you can measure a free service… by just the number of people who are trying it,” he said. “You’re going to have to stick to engagement-type metrics and how much time people are spending with the service — how much are you getting people truly committed to using the service.”

Moffett is among those predicting that streaming services will eventually face a shakeout, because there are simply too many of them. "That doesn’t mean that they’ll necessarily go away, but some of them are going to have to re-aggregate into packages that are a little more user-friendly,” he said. “So what you’re really looking for is, can they build a stable base of committed users who come back regularly?”

Given that MoffettNathanson expects a prolonged period of high unemployment, the bigger question for Comcast and other companies pushing to diversify into streaming but still dependent on cable television revenue is whether they “can replace with [streaming] advertising dollars the damage that’s going to be done to the traditional pay-TV ecosystem” as unemployment accelerates the trend to cord cutting in favor of less expensive streaming options, Moffett stressed.

“That’s going to be a very tough challenge for all of these players with traditional media businesses,” he concluded.