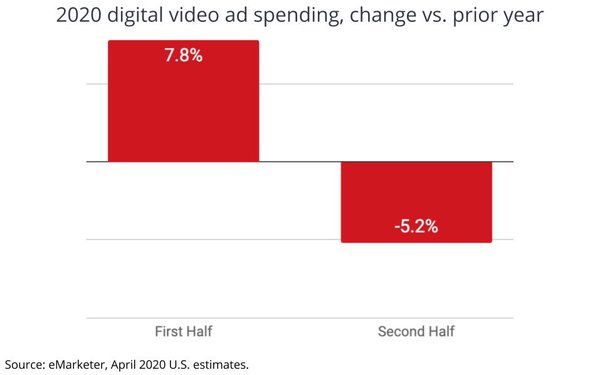 Digital video advertising, which grew 35.5% last year, is projected to expand only marginally this year, due mainly to a second-half crash in demand from U.S. advertisers. That's the finding of revised estimates from eMarketer, which projects digital video ad spending will decline 5.2% during the second half of 2020.

“Video ad spending will likely decline by somewhere between 1.3% and 21.0% annually in the second quarter,” the eMarketer report projects, citing quite a potential range for the second quarter of the first half of 2020.

“We assume spending declines began in March and will continue through June,” the report continues, adding “travel advertisers will make the deepest cuts to their digital video budgets, followed by media and entertainment advertisers. But ad spend across industries will be less on average, due to budget constraints as well as falling CPMs.”

"However, video is more insulated than other formats because it has long been in greater demand," said Perrin.  "Falling prices due to reduced overall demand will make video placements even more attractive compared to static banner ads.  The qualities that make video stand out to advertisers—sound and motion—are especially appealing for branding-oriented efforts, which many companies are now focused on."