Molson Coors Goes Down Another Road, Introduces Movo Wine In A Can 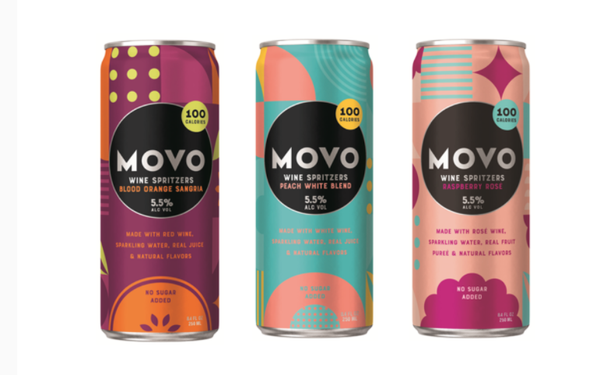 Molson Coors Beverage Company was called Molson Coors Brewing until the new year began, calling attention to the fact that there’s more to the company than beer.

This far into the year, it’s plain to see: Beer is not what’s floating Molson’s boat right now. Last week it kicked off its new Vizzy hard seltzer, and earlier this week, it announced a joint venture with a Canadian company to produce nonalcoholic beverages containing cannabis.

It has just introduced Movo, a line of canned wine spritzers, with 100 calories per 8.4 ounce can, and 5.5.% alcohol by volume. It comes in three flavors: peach white blend, raspberry rosé  and blood orange sangria.

Lisa Rudman, who is in charge of the brand for Molson Coors, calls it a “modern take on wine,” which might be judged its problem or its allure.

You can bet the latter. The new wine joins other wineries getting into the wine-in-a-can business, no doubt in part because those wines are spiritually connected to fruity flavored spiked seltzers and hard ciders. Those beverages increasingly take up shelf space, possibly where some old brown bottles of beer once were.

They are beverages for younger people who like the portability and the fact a can of beer can be “one and done.” Storing a half-empty wine bottle is a bummer.

The Movo digital campaign emphasizes a social media presence. With on-screen lines like “Screw the corkscrew” and “No glass? No problem,” it’s not pitching to the wine snob.

While the pandemic is altogether bad news, it probably has an upside for new product introductions. Stay-at-home consumers apparently are discovering those merchandise kicks just keep getting harder to find. Molson Coors pointedly notes that Movo “hits retail at a time when canned wine sales are on the rise, due in part to pantry loading.”

Starting in 2018, the category went from a non-starter and into the limelight. Canned wine represented just $2 million in sales in 2002, and zoomed to over $70 million last year.