Activewear Brand Wants To Give Free Masks To Everyone In America 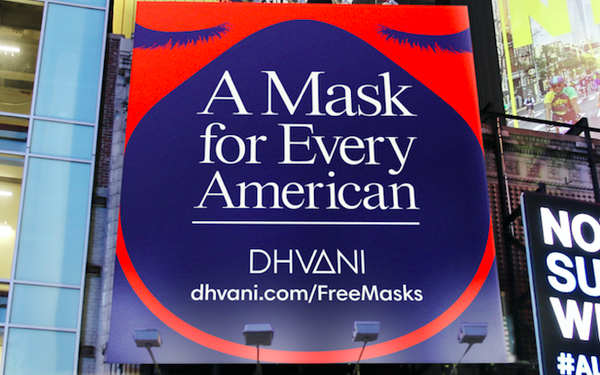 Dhvani, a D2C company best known for earth-friendly workout gear, is using a Times Square billboard to announce an ambitious freebie: To stop COVID-19, it wants to give a mask to everyone in America.

“We are learning every day that people can be very contagious, even if there are no symptoms. Wearing a mask isn’t just about protecting yourself, it’s about protecting other people,” says Avi Brown, co-founder and CEO. “We want to slow the spread in every direction.”

The use of the billboard -- at a time when so few New Yorkers are out on the street -- is symbolic, he tells Marketing Daily. “We hope nobody sees it because they’re sheltering in place, but if they do, we want them to get in touch and ask for a mask, or make a donation.”

Still, the message of the billboard is working. In its first day up, the company has gotten 60,000 requests for the masks.

The Portland, Oregon-based company felt it needed to jump in the face mask fray because of personal reasons. The mother of Kanayochukwu Onwuama, co-founder and CEO, is a registered nurse at the hard-hit Elmhurst Hospital in Queens, New York. Onwuama was horrified when he learned his mom had to wear the same mask for a whole week. Also, a close friend of Brown’s is recovering from intubation and a stay in the ICU.

So the company made an initial donation of 10,000 medical-grade masks to Providence St. Vincent Medical Center in Portland, and an additional 1,000 to essential workers, including grocery store employees. It’s readying another 10,000 for Elmhurst Hospital.

Brown says Dhvani is determined to crank out hundreds of millions of reusable cloth masks, in accordance with the recommendation from U.S. Centers for Disease Control. He declined to say how much he thinks the effort will cost. “We’re working in batches of 10,000 now, but we think we’ll get economies of scale as we ramp up.”

He says he’s hoping to recruit a few billionaires along the way. “Maybe Warren Buffett, Mark Cuban or Phil Knight, right here in Portland, will start making donations too, so we can make this possible.”

Dhvani, which makes its activewear out of fabrics made from bamboo and recycled plastic bottles, is no stranger to cause-related efforts. Earlier this year, it launched a Buy One, Plant One effort to help reforest Australia after its wildfires.

The company knows its way around Times Square, too. Last year, it created a series of ads highlighting President Donald J. Trump’s effort to block funding for Planned Parenthood that ran on billboards there. The provocative campaign showed a Trump impersonator being tied up with red, white and blue ropes by model Michal Mesa, a Marine Corps veteran and middle school teacher.

This effort, though, isn’t political. “The virus doesn’t care about politics, and we are all in this together,” says Brown. The U.S. “makes up about 4.3% of the world’s population, with one in four deaths from COVID-19. This is about public health and American ingenuity.”

While brands have been eager to help with COVID relief, new research from ListenFirst finds mask initiative are among the most meaningful to consumers. Fashion brands that are making or donating masks average 73% more responses on social media than other efforts.

Mask-makers range from mainstream brands like the Gap, Levi Strauss and H&M, to luxury companies such as Louis Vuitton, Burberry and Gucci.