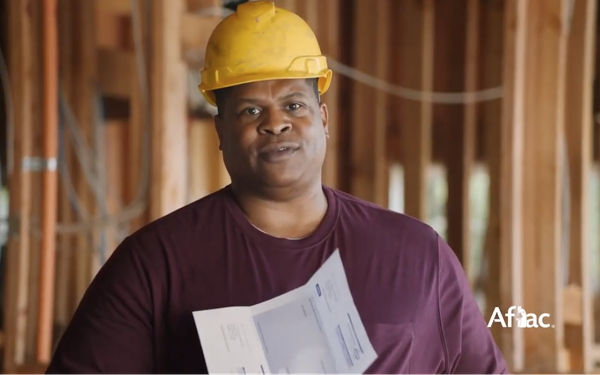 Aflac is launching a campaign that emphasizes its commitment to being there for consumers, such as to cover unexpected health care costs.

The effort, “Not Alone,” was developed in partnership with the brand’s new AOR Dagger and launches tonight during the NFL Draft with the campaign’s first commercial, “Gratitude.”

“For many, this creates a flurry of emotions: frustration, disbelief, anxiety, isolation and even embarrassment,” Mitchell tells Marketing Daily. “Through on- and off-air content, the intent of this campaign is to help normalize these conversations and diffuse the shame and embarrassment many individuals think only happens to them when a surprise medical bill hits.”

Creative explains how Aflac helps pay expenses such as childcare, non-medical bills and more, offering policyholders more control over what can feel like uncontrollable situations. It is an evolution of a five-year campaign the brand kicked off in 2019 to help consumers better understand Aflac’s products and services, she says.

“Based on extensive research, we know many consumers are familiar with the Aflac Duck but have misconceptions when it comes to how and when Aflac’s products can be used,” Mitchell says. “While last year’s campaign focused on eliminating these misconceptions, this second phase explains how Aflac can help cover costs that health insurance doesn’t cover.”

The NFL Draft was deliberately chosen by media AOR Spark Foundry for the launch, she says.

“Sports fans, and in particular football fans, are extremely loyal, which aligns with our brand and the relationship we have with our customers,” Mitchell says. “As a brand, we’ve found that sports such as football are a natural and genuine channel for us to reach and connect with current and future policyholders, even more so today, as people are searching for familiar outlets during challenging times.”

Consecutive spots will air across cable partners and on major television networks such as NBC, FOX and Bravo through fall of this year. Relevant messaging will also be amplified by strategically placed custom Spotify ads, iHeart Radio podcast ads, online videos and social media.

“By anchoring our campaign in driving awareness, human connection and innovation, we plan to diversify our media mix and messaging from expected environments to the unexpected,” Mitchell says. “From an awareness standpoint, we will be blanketing the video marketplace with presence across all screens: linear, OLV and CTV. We have also pivoted to take advantage of programming that is new in light of COVID-19.”