HBO At Top Of Its Game With Saturday School Scandal Movie 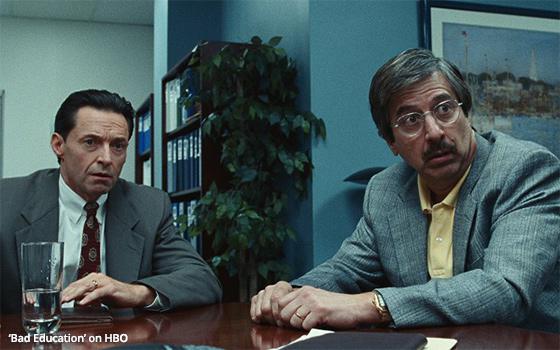 From a long and distinguished tradition of original moviemaking at HBO comes another instant classic, “Bad Education.”

Premiering Saturday night (April 25), this one has all the earmarks of the HBO way -- an A-list cast and a fast-paced script that makes a story about embezzlement in a suburban school district into a high-intensity thriller.

Adding to its authenticity and high quality, the movie was filmed at least partially in the actual community where this sensational crime exploded in 2004 -- Roslyn, N.Y., on Long Island’s North Shore.

In the case, two high-level Roslyn School District administrators were convicted of siphoning off district money for personal expenditures amounting to millions of dollars.

The two were superintendent Frank Tassone and assistant superintendent Pamela Gluckin, played in the movie by Hugh Jackman and Allison Janney. Ray Romano also stars as a local resident who is president of the school board.

The movie is a story about arrogance, entitlement and hubris, with a dollop of stupidity. As the movie demonstrates, the community in which the story took place -- like hundreds of other communities -- is close-knit.

In such places, it is inevitable that wrongdoing of this magnitude will be found out eventually. In “Bad Education,” the first rumblings that something has gone awry in the financial health of this peaceful, serene school district originate from a local hardware store manager who senses that something is off with some recent purchases made on a school district credit card.

And since the hardware man is related to someone who knows someone else, the word eventually gets passed to the school board, and the movie and its story are up and running.

The tip from the hardware man is only the beginning. “Bad Education” is also a story about a rare (and possibly unique) instance of dogged journalism undertaken by a reporter at the high school newspaper, Rebekah Rombom, who possesses a skepticism far beyond her years.

As a result, she gets the scoop on a story that made local and then national headlines. In the movie, the girl reporter’s name is changed to Rachel. She is played with pinpoint-accurate teenage earnestness by Geraldine Viswanathan (who happens to be 24).

A list found on Wikipedia of every made-for-HBO movie since the 1980s reveals an astonishing output so numerous that it seems almost absurd to point out some of the best ones.

“Bad Education” reminds us that HBO is still the first and best powerhouse in original productions among the now-crowded field of deep-pocketed pay-cable channels and content streamers. The truth is, the goal of all of them is to be HBO. But the bad news for them is: We already have one of those.