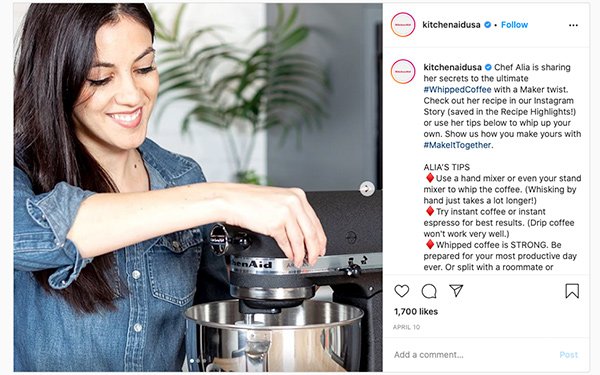 The initiative illustrates how some brands are parsing social media data for new campaigns that subtly promote products but also inspire consumers and fuel their creativity as they hunker down at home. The KitchenAid effort incorporates real-time insights to provide content aimed at the growing number of home cooks and bakers.

The campaign monitors stories, gifs, games, stickers and recipes posted on Instagram and Pinterest for some of the most-talked-about cooking trends from whipped coffee to homemade pasta.

For instance, Pinterest search data showed by the end of March, there were 13 times more searches for how to make bread. KitchenAid, via agency Digitas, promptly created and produced its own recipe that was shared across social media. Naturally the bread maker in the resulting content used a KitchenAid Stand Mixer to make this yeasty treat.

But such efforts aren’t without risks. While KitchenAid can control the content’s message and images, users can express their own opinions, both good and bad. In addition to the likes and enthusiastic proclamations, the Whipped Coffee post by Chef Alia, for example, also shows unhappy messages about KitchenAid’s customer service. One user frustrated with the website griped she will “try one more time and if it doesn’t go through I’m taking my money elsewhere.”

The campaign is supported via paid and organic content, UGC and email marketing. It’s extended through celebrity and influencer partnerships and public relations managed by Digitas sister shop MSL.

This project builds on the brand’s long-running “Makes” campaign aimed at discerning cooks. “KitchenAid created #MakeItTogether during this time to provide useful content, inspire creativity in the kitchen and bring people together around the joy and comfort of making,” says Nikki Lockett, U.S. marketing leader, KitchenAid Small Appliances.