CEO Spotlight: Evite Wants To Be The Pinterest Of Virtual Parties 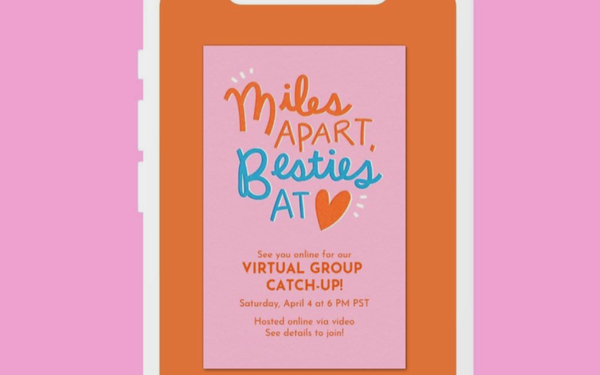 With all the world seemingly held hostage by Zoom get-togethers, Evite — the grandfather of digital invitations — is changing the game. In a move it hopes will make it something like the Pinterest of virtual parties, it’s launching a community resource hub to help people connect in the era of social distancing. Victor Cho, CEO of the Los Angeles-based company, explains.

D2C FYI: Let’s start with the timeline. When did you say, “OK, we’ve got to do something different?’”

Victor Cho: We’d been tracking the virus very early, when it was still just in China. Part of my job is to look ahead, and it was clear early on that the pandemic would radically change behaviors in our core business, which is people coming together face to face.

So we were a few weeks ahead of the rest of the world, and one of the first companies in Los Angles to move our team to remote work. And we knew that while physical parties were stopping, people would still want to connect. We started to think about ways we could add value.

Cho: We’ve shifted the entire business. First, we realized these virtual events are going to be huge.

People are still going to have birthdays. Even early in March, we saw that happening on Zoom. And we embedded video calls within days. But mid- to long-term, that’s not enough. There’s a role for a real virtual party. And what better brand to do that than us?

Cho: About three weeks ago — we’re still in beta — we launched an integrated version of video, so you can go to video with one click. You don’t have to go to Zoom.

The feedback has been very positive. And down the line, we’ll begin to add more and more value into that.

In my mind, there’s a bifurcation coming, with businesses using videoconferencing most. But it’s really up to companies like us to solve for the virtual party experience.

And the epiphany is that we have a broader purpose than most brands because it’s emotional. The value of these emotional connections can transcend the physical get-together. We want it to be inspiring.

D2C FYI: But much of what people are doing online isn’t fun, though. It’s grim. How do you keep it light?

Cho: The world needs inspiration because people are being inundated with information about the pandemic and the disease.

The nugget we see is that there’s lots of positive content being created about maintaining social connections. And so we thought, “Why don't we curate that?”

The microsite pulls together the best that we can find in information about maintaining emotional connection. And we hope the community that comes starts to feed the engine, offering better real-world tips, tricks and advice.

D2C FYI: How are you reaching out to consumers?

Cho: Our first salvo was giving away all of our premium cards for free. And we've also made it more personal. We added integrated video, so you can send a card that has a video message embedded in it. That helps people add more emotion.

D2C FYI: Evite has been around a long time — since 1998, which makes it one of the oldest digitally native D2C companies. So you’ve seen a lot. What’s caught you by surprise?

Here’s a personal example: Virtual happy hours were never a thing before. But some college friends of mine just pulled one together — the first time we’d all connected in more than 20 years — and it was amazing. We vowed to do it quarterly, to rebuild those bonds. That’s not going to go away.

D2C FYI: The site is ad-driven, which some consumers don’t like. How have advertisers responded?

Cho: We're seeing a huge interest from the advertising community. We’ve always been appealing, because of the context of the event. And we wondered if that would translate into the virtual world. There's a ton of interest from advertisers that want their brand to stay relevant. Soon, you’ll see ads in the integrated video experience.

D2C FYI: Before, people used Evite for events they were planning weeks — and often months —in advance, like weddings, anniversaries and baby showers. Is COVID-19 changing that?

Cho: Absolutely. The average virtual event gets triggered three to four days before it happens, versus two to three weeks in the past. But people are still planning events with very long runways, like weddings. They’re optimistic that things will get back to normal.