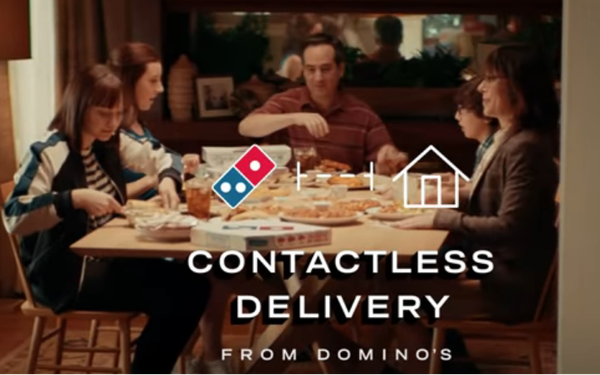 Pivoting quickly to chain-wide, contactless delivery, with a sustained advertising push to promote that fact, is helping Domino’s Pizza weather the COVID-19 crisis across its 6,156 U.S. locations.

In the first quarter ended March 22, same-store sales rose just 1.6%. But in the four-week period that followed, comparable sales soared by 7.1%, with the increase driven mainly by digital ordering.

That’s why some Wall Street analysts seem to believe if a QSR business plan could have been created that would stand up to the disruption fostered by the current pandemic, it probably would resemble Domino’s.

The primary ingredients: very little on-premises dining in favor of takeout and delivery, big investments in digital channels, and the rejection of third-party delivery services like Grubhub and Uber Eats.

Domino’s “is about as well positioned as a restaurant company could possibly hope to be for the current COVID-19-impacted industry environment,” Deutsche Bank analyst Brian Mullen wrote in a report.  The chain’s current financial results “are reflective of that reality.”

On a conference call last week, Domino’s CEO Rich Allison described the company as “a 60-year-old brand that has rewritten most of our standard operating procedures in the last six weeks.”

Foremost among the changes is company-mandated, contactless delivery.

“We pivoted our advertising quite significantly to focus on those important cues, which are very important to customers right now to have a safe and pleasurable food experience for their families,” said Allison.

“We’re not pulling back one bit on advertising during this [time.]”

One example is a 15-second “Peace Of Mind” commercial from Crispin Porter & Bogusky that tells viewers, “At Domino’s, we pride ourselves on hand-crafted pizza. But after leaving our 450-degree ovens, the only hands that touch them are yours.”

“And I am really proud of our advertising team,” Allison added. “I mean, they have pivoted so quickly. And if you look back over the last six weeks or so, they produced about an ad a week. Normally we go through a much more prolonged cycle to produce advertising.”

Domino’s has seen a pronounced shift in customer behavior. Sales are higher during the week but lower than usual on weekends, with late-night orders down significantly, according to Allison. “There just aren’t evening gatherings of people or sporting events to watch and things like that.”

The chain believes its decision to avoid third-party delivery aggregators is paying off because it controls its relationship with people who place digital orders —in one recent week representing 80% of sales—and keeps prices lower.

“I am so glad that we are not on these aggregator platforms,” said Allison. “I'm also very glad that we've made the decision over time to continue to own that customer relationship on the front end.”

In a report after the company released its Q1 results, BTIG analyst Peter Saleh wrote that “brands such as Domino’s that have invested in their digital infrastructure have a lasting competitive advantage not only on sales but also within their cost structure.”