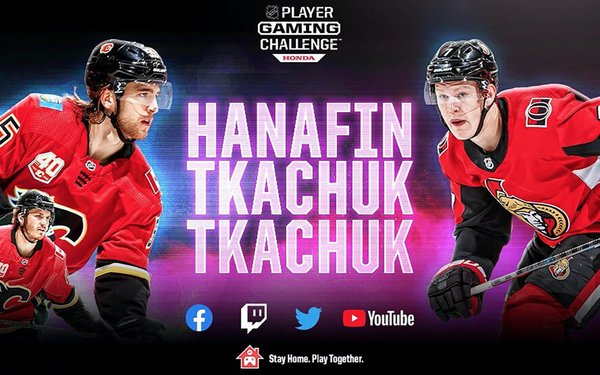 While the National Hockey League season remains paused, sports fans are desperate for something to watch.

Honda, the NHL’s Official Automotive Partner in the United States and Canada, has supported the league’s esports initiatives since the inception of the NHL Gaming World Championship in 2018.

The regular season was originally scheduled to end on April 4 and the 2020 Stanley Cup playoffs would have originally begun a few days afterwards, with the Stanley Cup Finals held in late May and early June.

During the Stanley Cup playoffs, Honda would have been the only automotive partner, with signage featured on sideboards at all hockey arenas. The automaker planned to feature the CR-V Hybrid in program ads at the events and run CR-V Hybrid creative on the NHL.com properties and on broadcast.

“We know this is a difficult time for many people, including our dedicated NHL hockey fans, and we are pleased to help provide access to NHL players and matchups in this virtual environment while supporting COVID-19 relief efforts,” said Meliza Humphrey, manager of Honda automobile advertising at American Honda Motor Co., Inc., in a release.

The National Hockey League Foundation and Electronic Arts will donate a combined $100,000 in support of the Center for Disease Control Foundation’s COVID-19 relief efforts.

Los Angeles Kings TV play-by-play announcer Alex Faust will host the series of weekly matchups, which will be released on Thursdays and Saturdays. NBC Sports will air the first series of games, including Calgary vs. Ottawa and Columbus vs. Winnipeg, beginning April 30 at 5 p.m. ET on NBCSN as part of its Hockey Happy Hour programming.

Content will also be available on Sportsnet’s digital and social platforms, NHL Network, and streamed on NHL social media platforms and NHL.com.

Honda will be integrated into all tournament content, including highlights, on NHL league, club and player digital and social properties, including logo integration, end tags and bumper graphics. On the NHL’s Twitch and YouTube platforms, Honda will have logo placement throughout all streams, as well as a brand commercial spot integrated into the livestream broadcast.

Over the course of four weeks, each club will be represented by one or two current players and featured in a one-time matchup against another club. Weekly matchups, storylines and broadcast details will be revealed at the beginning of each week.