On The Heels Of 'Parasite,' A Hard-Boiled TV Series From Korea 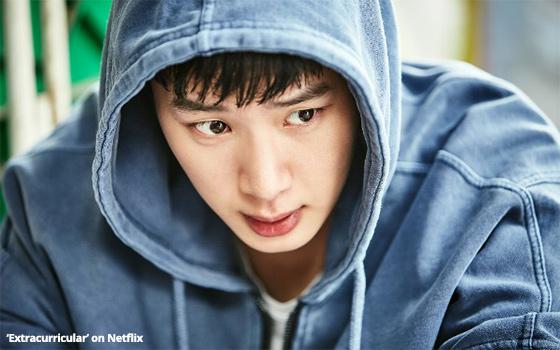 It is tempting to draw conclusions about the condition or well-being of another country's society from the visual entertainment media that occasionally trickles out of it.

Last year, for example, many Americans had what may have been their first-ever exposure to a small slice of contemporary society in South Korea, albeit fictional, thanks to the movie “Parasite.”

However, other than that movie, how many of us have ever really paid attention to movies or TV shows from South Korea?

My own experience includes no movies at all from South Korea until “Parasite,” and just fleeting glimpses of TV shows encountered for mere seconds while grazing through my cable lineup in New York City.

These shows were either comedies or music-and-variety shows, and since they were in Korean, I never stopped for long to watch them, much less try and understand them.

For its part, “Parasite” not only gave us all a peek at Korean class divisions, but it also revealed to many of us that the filmed-entertainment industry in that country is mature and highly sophisticated.

But did it reflect South Korean society as a whole? A mere American who writes a decidedly stateside TV Blog can have no idea based on his minimal exposure to Korean-made film content.

As of this week, that exposure formerly limited to just “Parasite” expands by one -- a new made-in-Korea TV series called “Extracurricular” that has been imported by Netflix, possibly with the success of “Parasite” in mind.

“Parasite” emerged as a sleeper phenomenon whose renown grew late last year through word of mouth.

Perhaps Netflix is experimenting with “Extracurricular” to see whether a similarly hard-boiled crime TV series with class complications can catch on in the same way.

“Extracurricular” is about a lonely high school boy (played by Kim Dong-hee, pictured above) who carries on a very secret other life as a criminal -- in his case, as the overseer of a call-girl business.

The first two episodes of “Extracurricular” do not reveal much about how this boy built this unusual business.

But the show does demonstrate how he can masquerade as a much-older prostitution kingpin simply by restricting his communications with underlings to cell phone messages -- texts and also voicemail messages using a computer-generated voice that is not his own.

To conduct his business this way, he has adopted the simple nickname “Uncle,” and stores what little he needs in an anonymous locker in a transit station. The city might be Seoul or some other South Korean city, but this is not made plain in the show's first two episodes that the TV Blog previewed.

Among his fellow students at school, the boy plays it meek -- even allowing himself to be bullied by the class tough in order to maintain his criminal cover.

No one suspects this friendless Korean Caspar Milquetoast of anything at all, until another student -- a girl in his class -- begins to discover his secret, and then embarks on criminal behaviors of her own.

To bring this review back to “Parasite” and its war between a family of haves and a family of have-nots, the girl student's wealthy parents are already grooming her to become CEO of the family business.

Meanwhile, the boy who is running a secret criminal enterprise has been an orphan since ninth grade, and he has also kept this secret from everyone, including officials at his school.

One of the biggest surprises of “Extracurricular” -- and to some extent “Parasite” too -- is the realization that the Koreans have the same affinity for stylized film violence, sex and profanity-laced dialogue as our movie makers and TV producers have here in America.

This is not necessarily a compliment to the Koreans, but nor should it turn off Netflix subscribers in America from sampling this very stylish and very modern TV show.

If the Koreans have developed a taste for this kind of R-rated material, then they are not that different from Americans in this regard.

Or to paraphrase Pogo: Thanks to “Parasite” and now “Extracurricular,” we have met the Koreans, and they are us.