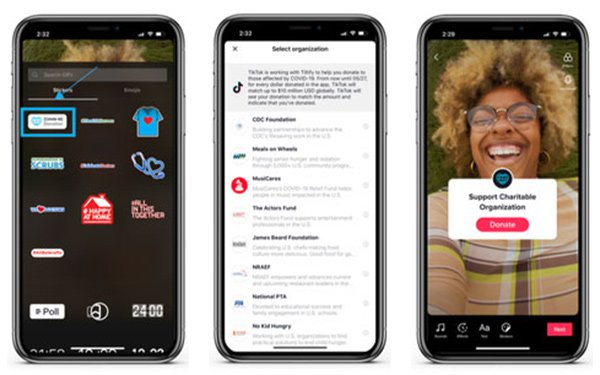 To assist those impacted by the ongoing pandemic, TikTok is encouraging users to add new “donation stickers” to their videos and live streams.

“When a user taps on the donation sticker, they will be guided to a pop-up window where they can quickly and easily submit a donation without having to leave the app,” says Sean Kim, head of product at TikTok US.

In order to kick-start the initiative, TikTok has pledged to match the first $10 million in donations. It has also partnered with top charities, including the CDC Foundation, Meals on Wheels, and the James Beard Foundation.

Additional partners include the British Red Cross, the National Restaurant Association Education Foundation, No Kid Hungry and The Actors Fund.

For the new feature, TikTok is relying on fundraising platform Tiltify, which specializes in securely processing donations.

Earlier this month, Facebook added “Care” emojis to Messenger and its flagship app, which are designed to help people share their support with one another during the health crisis.

“The digital barrier features a radius of approximately six feet … the minimum safe distance as recommended by the World Health Organization … and follows Snapchatters as they move throughout their environment,” said Rachel Weiner, creative strategy lead at Snapchat.

Other social networks have already committed big bucks to helping people impacted by the pandemic.