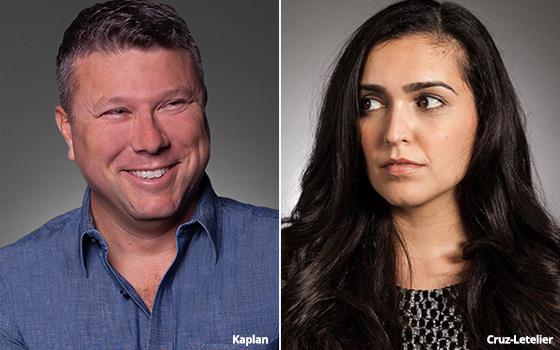 The agency will now have two partners serving in the C-suite alongside the two founders, Chief Strategy Officer Matt Mofherr and Chief Creative Officer John Matejczyk.

"We're an agency of doers, so yeah, they will continue to serve in their current positions,” explains Hofherr. “What they now have as partners is full access to the operations of the company and a more direct way to impact things for the better."

Cruz-Letelier has spent the majority of her career at the firm, starting out as an account manager in 2011 after a stint at Goodby Silverstein & Partners. Over the past few years, Cruz-Letelier is credited with overseeing every client account and will continue to manage client relationships.

Kaplan has had a less traditional journey to this partner promotion, working as a cook, construction worker, accountant, teacher, and sound engineer, among others, prior to jumping to AdLand when he joined Crispin Porter + Bogusky. He moved to MH as a creative director in 2015 and over his tenure, he has helped acquire and lead some of MH’s biggest accounts including Audi, Netflix, Staples, and Intel. As partner, Kaplan will continue to lead several key accounts.

Although MH knew last year that they would make this announcement in Q1, the COVID-19 crisis pushed timing back to the start of Q2. However, these promotions underscore the founders’ belief that now is when agencies should invest more in leadership.

“As we engage in more long-term, strategic client engagements as the year continues, having Joel and Carolina on the leadership team to oversee our agency’s evolution will be invaluable,” says Hofherr.