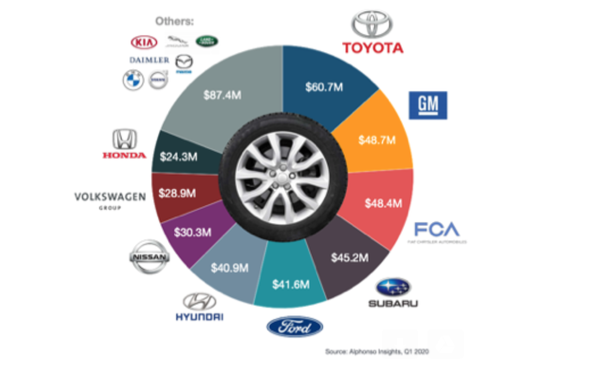 Before COVID-19 reared its ugly head, automakers spent close to $456 million dollars on TV advertising in the first quarter, according to TV analytics firm Alphonso.

Toyota led the pack, outspending its nearest competitor by $12 million.

Among the top six brands by spend, Toyota, Hyundai and Jeep all invested in the Super Bowl.

The quarter is usually dominated by college and pro sports -- but after COVID-19 halted seasons including the NCAA’s March Madness runup to the NCAA Basketball Tournament, more airings shifted to popular TV stalwarts like “The Voice,” “American Idol,” “60 Minutes” and family or crime dramas.

Nissan’s “Refuse to Compromise” TV campaign garnered the brand a 27.8% overall lift in visitors to dealerships, according to Alphonso. The spot, featuring actress Brie Larson, was created by TBWA and debuted March 11. Nissan spent $7.1 million for 2467 airings.

The feminist message garnered some misogynist blowback from trolls on social media. But clearly it resonated with the audience it was targeting: “accomplished, career-focused individuals,” according to Allyson Witherspoon, vice president, marketing communications and media, Nissan North America.