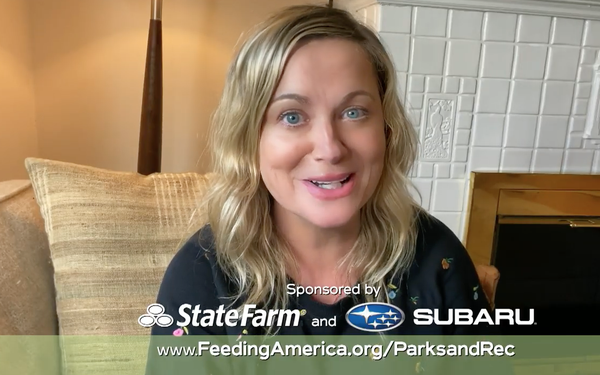 Subaru of America, Inc. and State Farm are sponsoring a reunion show featuring the cast of “Parks and Recreation.”

The show is a charitable telecast to benefit Feeding America’s COVID-19 Response Fund. The premise is that Amy Poehler’s Leslie Knope character is trying to stay connected to her friends while everyone is social distancing. Footage of all the actors was taped in their homes.

Consumers can make a donation at FeedingAmerica.org/ParksandRec. Subaru will match donations up to $150,000.

A combined total of $500,000 in matching donations from State Farm, NBCUniversal and the writers, producers and cast of “Parks and Recreation,”  will be made through May 21.

The automaker’s sponsorship of the special follows its partnership with Feeding America,a nationwide network of 200-member food banks, to help provide 50 million meals to people most impacted by COVID-19.

“Alongside Leslie Knope and the ‘Parks and Recreation’ crew, we hope this reunion not only delights viewers everywhere, but empowers consumers to join our efforts to fight hunger amid the pandemic,” said Alan Bethke, senior vice president of marketing, Subaru of America, Inc., in a release.