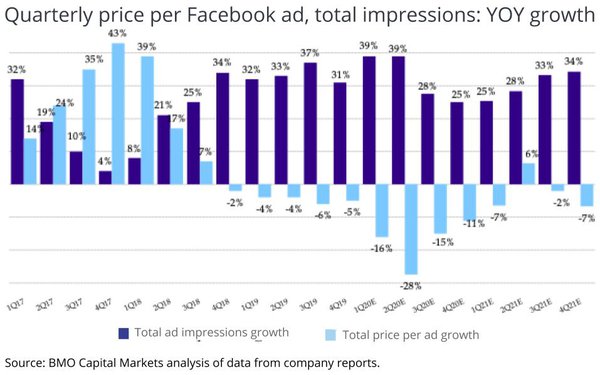 Despite a decent first-quarter performance, Facebook says the health crisis poses a significant risk to its financial health.

“Our business has been impacted by the COVID-19 pandemic and, like all companies, we are facing a period of unprecedented uncertainty in our business outlook,” the tech titan warned its latest earnings report.

Over the last three weeks of the first quarter, Facebook said it experienced a “significant reduction in the demand for advertising, as well as a related decline in the pricing of our ads.”

Despite that dip, the company still managed to put up respectable quarterly numbers, including revenue of $17.74 billion, which was up 17%, year-over-year.

“But the fact that revenue was flat in the first three weeks of April indicates that [the second quarter] will be a much more challenging quarter than [the first quarter] was,” she added.

Due to what Facebook is calling the “increasing uncertainty in our business outlook,” the company did not provide specific revenue guidance for the second quarter, or full-year, on Wednesday.

The company said it did see “signs of stability reflected in the first three weeks of April, where advertising revenue has been approximately flat compared to the same period a year ago.”

The pandemic has also presented Facebook with some unique opportunities. For example, trying to ride a wave of interest in video chat services, it recently launched Messenger Rooms.

The crisis is also giving Facebook the chance to host what could turn out to be the largest graduation ceremony in history.

To date, Facebook has committed to donating approximately $300 million to help those impacted by the pandemic.

The company’s broader response to the pandemic has included a COVID-19 “information center,” providing health organizations with free ads and tools to track the pandemic, and offering government and emergency organizations free access to its Workplace platform.

Facebook recently said it would require the vast majority of its 45,000 employees to work from home through at least the end of May.

The company said it was also canceling all large physical events with 50 or more people through June 2021, while it extended its policy of no business travel through at least June..