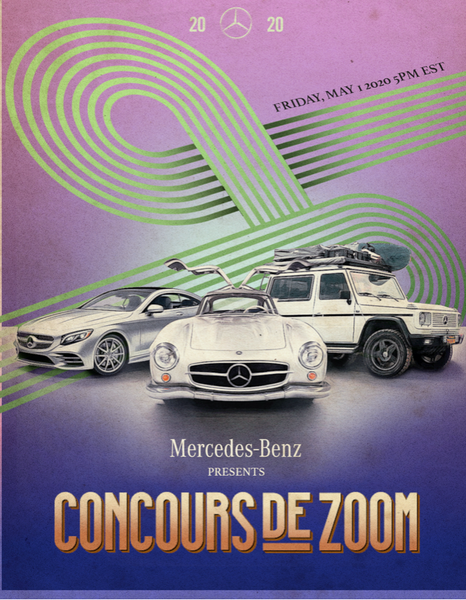 With the summer’s most prominent car show being cancelled due to the pandemic, Mercedes-Benz USA is giving collectors a chance to show off their prized vehicles via videoconferencing.

The automaker will host the first-ever virtual Mercedes-Benz Concours on May 1 at 5 p.m. ET, "Concours de Zoom."

Each participant will share a few things they love about their vehicle. At the end, a donation will be made to the American Red Cross on behalf of the participants.

Viewers can click the following link and will be admitted to the Zoom webinar once the event begins: https://zoom.us/j/99721462795

Officials of the Pebble Beach Concours d’Elegance, scheduled for Aug. 16, announced last week that the show was cancelled due to pandemic health concerns. Participants had already been selected and will be invited to bring their vehicle to the 2021 show instead.

The charitable event, held on the Pebble Beach Golf Links in California, has attracted an increasing number of automakers each year which set up activations, including Mercedes-Benz, Jaguar Land Rover, Infiniti and Cadillac.

Concours d’Elegance typically draws 15,000 attendees and is open to both prewar and postwar collector cars, which are judged for authenticity, function, history and style.

Organizers of another large classic car event, the Woodward Dream Cruise, are still planning to hold the metro-Detroit event Aug. 15. In years past more than one million visitors have attended,  watching more than 40,000 muscle cars and and special interest vehicles cruise up and down a 12-mile stretch. A number of automakers hold activations in conjunction with the event, including Dodge and Ford.