Once Upon A Time In A Pandemic: A TV Blog Memory 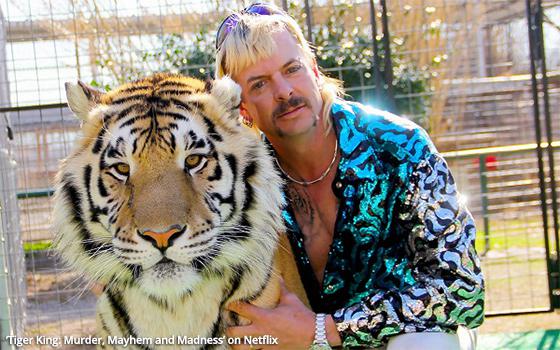 Time plays tricks during a pandemic, and also wreaks havoc on our collective memory.

Many are no doubt asking: Where did the last eight weeks go? And even more commonly: What day is today?

The latter has been one of the most conspicuous phenomena of the pandemic -- forgetting the day of the week while sheltering at home because every day is more or less the same, even weekends.

To help myself (and hopefully others) get some perspective on the era of the pandemic, I went back in time -- eight weeks back, to be exact -- to the dawn of the TV Blog’s first brush with the pandemic when it was then in its infancy.

I found that not unlike some of our government leaders, the TV Blog did not acknowledge the presence of COVID-19 in our lives until March 6, exactly eight weeks ago this past Friday.

In that March 6 column, mention of the pandemic came briefly at the very end, following a consideration of two other subjects that made more news that week -- the sudden resignation of Chris Matthews from MSNBC following sexual harassment allegations, and the coverage earlier that week of the Super Tuesday primaries (on March 3).

Remember those stories? Probably not. Forgetting what the world was like before everyone on Earth hit the pause button is another psychological phenomenon of the pandemic.

The column that day praised the networks for their coverage of the week’s political news, but then wondered whether they would expend the same effort to cover the new pandemic.

“At the same time, a pandemic appeared to be accelerating,” said the March 6 TV Blog, reviewing the week's news. “But TV news has yet to give the same attention to the spread of the coronavirus that they give every night to politics.” This would soon change, of course.

Over the past eight weeks, and including that March 6 blog, 22 of these blogs, out of 40, had to do with COVID-19 and its implications for television.

Sometimes, these columns would involve the pandemic in less-than-direct ways, such as the two blogs that were devoted to “Tiger King,” the Netflix reality series about people who raise and maintain collections of lions and tigers in captivity.

This show, which was the subject of the TV Blog on April 2 (“Tiger By The Tale: In Confinement, TV Tastes Vary”) and April 9 (“Just In Time For The Pandemic, Netflix Scores With ‘Tiger King’ ”), was for a time the second-hottest topic in America (besides the pandemic).

Now just a few weeks later, no one seems to be talking about it anymore. This is another feature of this pandemic experience. Things that seemed important just a short time ago have fallen by the wayside of our memories as the pandemic and its restrictions have evolved and changed.

Another thing you are seeing less and less of as the restrictions wear on: Feature stories purporting to recommend TV shows to binge-watch. These were prevalent a few weeks ago, but they too have tapered off.

The TV Blog never did a “What to Watch During the Pandemic” list. Instead, many of the COVID-related columns in the past two months were attempts to put the coverage of the pandemic in perspective.

The topics covered included the late-night hosts and news anchors all broadcasting from home, how President Trump's daily briefings were playing on TV, the cancellation of the spring upfront presentations, and the conspicuous absence of TV sports right now.

Perhaps the quaintest of all of the TV Blogs that appeared here since March 6 was the one published on March 17 -- a review of what would become the last debate between Joe Biden and Bernie Sanders.

The headline on that one was: “In Midst Of Virus Crisis, Dem Debaters Go Elbow To Elbow,” a reference to how the two candidates greeted each other onstage, using the “elbow touch” method that had so fashionably replaced the traditional shaking of hands.

Cut to the present day, and going in for an elbow-touch greeting would be considered an act of insanity.

And now, the question that arises for the TV Blog is: What will the next eight weeks bring in TV land?