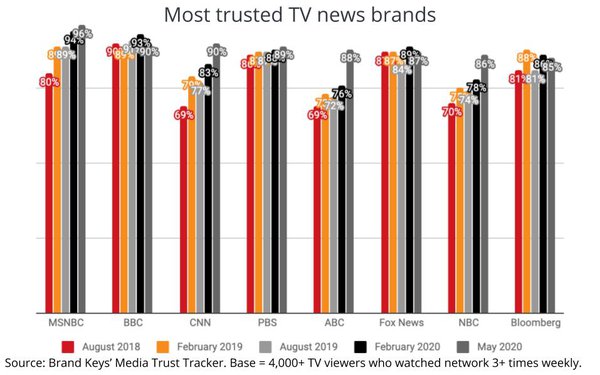 With two in three Americans sheltering-in-place, one in five unemployed, and three to seven Presidential, Gubernatorial, and/or Mayoral press briefings daily, there are hours of wall-to-wall “breaking” news covering the COVID-19 crisis.

So it's no surprise that broadcast and cable networks have seen big bumps in viewership. The question for this fifth wave of tracking is -- while there are more viewers, how strong is viewer-trust for the TV news brands they watch regularly?

We began conducting The Media Trust Tracker for MediaPost in 2018 to measure the precise contribution “trust” plays in viewer engagement and viewership for TV news brands.

All other news brands remained relatively static in this wave when it came to the value of “trust,” although Brand Keys attributes the directional decrease for FOX News (87%, -2%) to viewer reaction to FOX’s initial downplaying of the COVID-19 threat for weeks. Their anchors pivoted on the “hoax.” They allowed their prime-time lineup (Tucker Carlson, Sean Hannity, and Laura Ingraham) to broadcast misinformation based on the musings of President Trump, related to heading back to work even if those actions might kill more people, to advocating unproven and potentially dangerous drugs and snake-oil coronavirus cures.

As a huge percentage of the news coverage included President Trump, we again measured how much “trust” viewers had in the President, versus their regularly watched TV brands. And, as Joe Biden is the presumptive Democratic candidate for the presidency, we collected a first-time trust measure for him this wave as well.

For Mr. Biden, the affiliation analysis had Democrats at 72%, Independents at 39%, and Republicans at 18%.

The “trust” numbers correlate closely to other recent metrics, including the President’s approval numbers. Those have taken a negative turn as Americans’ doubts about his handling of the coronavirus crisis have grown, fueled by his own daily televised briefings and a truly “captive” audience consuming more news. Additionally, the staggering unemployment numbers exploding on his watch – and covered daily by TV news – are likely affecting his “trust” levels as well.

Mr. Biden, whose campaign has generally been sidelined by the coronavirus crisis, has hit recent obstacles as well. He has flatly denied a former Senate aide, Tara Reade’s allegation of sexual assault. He has faulted Mr. Trump’s handling of the pandemic, saying “The President response has been slow and chaotic. Fortifying that opinion, a recent Pew Research Center poll found nearly two-thirds of Americans (65%) think Trump was too slow to take steps to address the coronavirus threat when it was first reported in other countries. 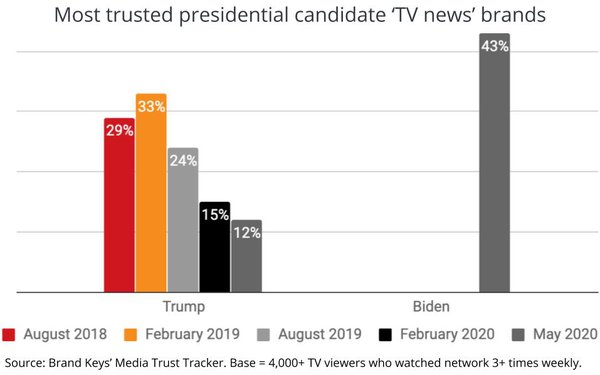