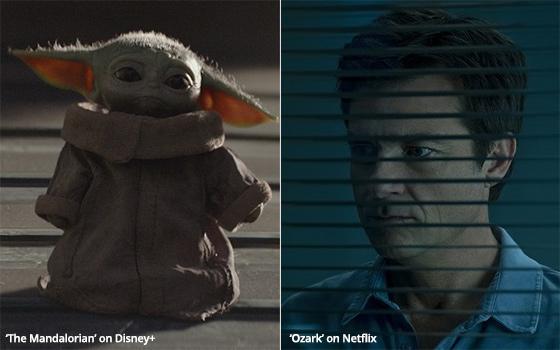 In a major blow to Netflix, the nation’s premiere consumer watchdog, Consumer Reports, is advising its readers to drop Netflix in favor of Amazon Prime, Disney+, Hulu and other streaming options.

“Break Up With Netflix,” reads one of the headlines in the June issue of CR. “Go All-In On Amazon Prime,” reads another one just inches away.

“Netflix is an enormous general store of movies, TV shows, and hugely popular original series like ‘The Crown’ and ‘Ozark’ [pictured above]. But if you can live without Her Majesty, you may be able to drop this $9- to $16-per-month streaming habit without feeling much pain,” CR says.

The mag then goes on to list the advantages of dropping Netflix in favor of its competitors.

“Disney+ costs just $7 per month and features ‘Star Wars,’ Marvel, NatGeo, and, of course, Disney content. Hulu offers heaps of shows (with advertisements) for $6 per month. Amazon Prime members get a hefty library of free video content. And there are loads of other free options.

“If you subscribe to Netflix because you’ve always subscribed to Netflix, it could be time for a change,” CR writes. “Potential savings [for following CR’s advice]: At least $108 per year.”

CR is so bullish on Amazon Prime that the mag devotes an entire item to the benefits of the Amazon streaming service alone under the “All-In” headline referenced above, despite the annual price tag of $119 (for free shipping).

“If you’re paying $119 per year for free shipping, why not take advantage of the thousands of free movies and TV shows that come with it?” asks CR. “Prime members also have access to free digital editions of select magazines (including National Geographic and Better Homes & Gardens), books and comic books -- plus 2 million songs.

“Video fare includes award-winning series like 'The Marvelous Mrs. Maisel' and HBO classics such as 'The Sopranos,' 'The Wire,' 'Curb Your Enthusiasm' and 'Deadwood'," CR writes.

The mag then advises its readers to consider dropping HBO too. “Potential savings: If there’s enough to coax you into cutting HBO, Netflix and other streaming services, you could save hundreds per year.”

CR’s comparison of the streaming services is part of a 10-page package of stories in the June issue headlined “Save Hundreds On Cable Bills” followed by a subhead and introductory copy that reads: “[and] … Phone Bills, Streaming Services, Computers and more with this advice from CR’s experts, often without sacrificing any convenience or pleasure.”

Three pages are devoted to “14 Ways to Stream Shows For Free,” a listing of on-line and video streaming resources offering a great variety of content for free -- some better-known than others, -- including YouTube, IMDb TV (owned by Amazon), Pluto TV, Vudu, Tubi TV and nine more.

Another one-page section offers cost and content comparisons between seven new streaming services -- some already up and running such as Apple TV+, Disney+ and Quibi, and others due to start up this year, including HBO Max (scheduled to launch May 27) and Discovery/BBC.