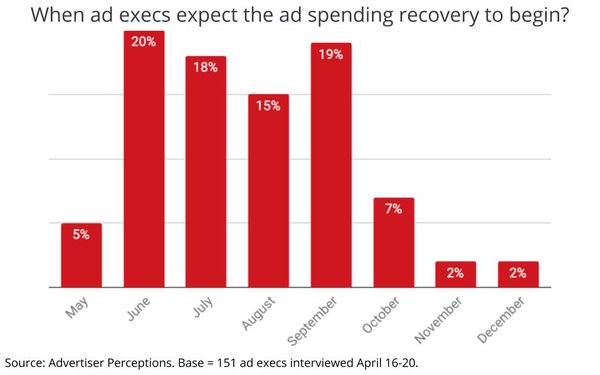 After sustaining its worst economic hit possibly since the Great Depression, ad executives currently expect the ad-spending recovery to begin in the third quarter, according to findings of the third wave of an ad industry tracking study on the effects of the COVID-19 pandemic on the ad business by Advertiser Perceptions.

The study, which is based on interviews conducted with 151 advertisers and media buyers, finds more than half (52%) expect ad spending to rebound in the third quarter. (Not represented in the chart above: 1% said April and 5% said the first quarter of 2021.)

The study did not ask respondents to qualify what they meant by the beginning of a recovery, but the sentiment nonetheless is an encouraging sign of a rapid rebound given the magnitude of the pandemic on the nation's economy, which some economists predict could contract as much as 30% during the third quarter due to record unemployment and the disruption or near collapse of many industries.

That said, ample bodies of ad industry research have shown that based on past recessionary cycles, brands that maintain or boost their ad spending during downturns typically grow their share disproportionately coming out of them.

In the meantime, the survey paints a bleak picture of tough times for advertisers, agencies and especially their media supply chain.

Asked how much time they are willing to give media suppliers before cancelling of moving ad budgets, nearly three quarters said three months or less.

That insight could be devastating news for networks and digital suppliers heading into the most uncertain upfront and newfronts marketplace in modern history.

Typically, advertisers buy upfront mainly to secure inventory in advance to avoid risking being shut out or having to pay significant price increases over upfront ad rates. But many on the demand-side now expect the 2020-21 upfront may look more like a hybrid 2021-22 one, with negotiations not beginning until the middle to end of the fourth quarter for upfront buys running four or five quarters beginning in 2021. They also expect to seek higher-than-normal degrees of flexibility, including greater cancellation options, though suppliers may be reluctant to risk so much downside exposure.

“I don’t expect many new advertisers to enter the upfront this year, it will be mostly legacy players,” predicts Advertiser Perceptions Executive Vice President-Business Intelligence Justin Fromm, adding: :And it’s hard to see any advertisers locking in large portions of their budgets  There is a premium on flexibility right now, so networks need to keep up the cooperative attitude and enable advertisers leeway to move and pause budgets.

“The big question for advertisers will be, if you have a legacy CPM [cost-per-thousand], how will you negotiate to keep it?” Fromm says, noting, “That’s especially true if you can’t take as much inventory this year. It can also come into play if you vie for more inventory given slack demand, which could open the door for a network to renegotiate the legacy CPM altogether." 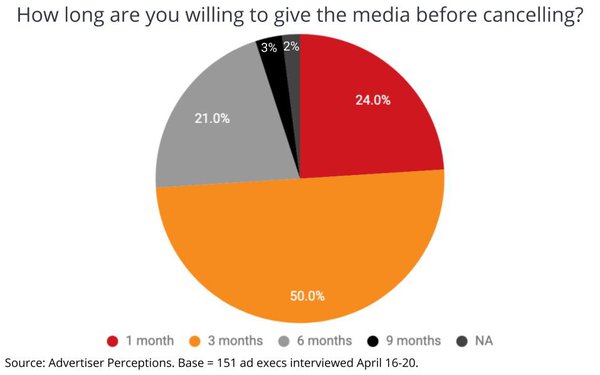