Farfetch Proves That In Hard Times, It's Fun To Be Fancy 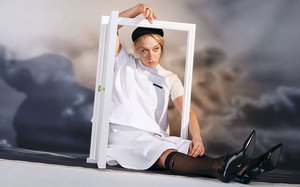 Anyone pondering the stark line between the haves and the have-nots lately ought to take a close look at Farfetch’s new earnings report.

COVID-19 store closures have many apparel retailers gasping for air, and some even filing for bankruptcy. But Farfetch, the global luxury platform, recently posted a dizzying 90% jump in sales, rising to $331.4 million. That beat Wall Street expectations, as did its loss of $79.2 million.

And while the average order fell a bit, from $601 in the prior quarter to $571, the company says the number of active users went from 1.7 million to 2.1 million.

Despite the uncertainty the pandemic is casting over the rest of the year, Farfetch believes its stable unit economics still have it on a clear path to profitability.

It would be easy to be snide and say that stability comes from catering to an audience that craves $845 Valentino sneakers or $625 Versace leggings. But if that were true, Neiman Marcus wouldn’t have been one of the first retailers to file for bankruptcy since the pandemic began.

How appealing? We’ll see as we move into the next quarter, which promises to be brutal. The U.S. commerce department announced that the decline in retail sales in April weren’t just dismal, they were the worst since 1938, plunging 20.9% on a year-over-year basis. Apparel was hurt the most, with sales dropping 89.3%.

The company's Digital Economy Index, based on more than a trillion visits to retail websites, shows that apparel shopping rose 34% in April. (And in news that’s good for consumers but bad for stores, prices for the month dropped 12%, the largest drop in five years.)

Still, Farfetch does have virus-related struggles. The company partners with 1,200 sellers, each of them as punished as the next retailer by closures. To help, Farfetch launched a comprehensive #SupportBoutiques initiative, encouraging the Farfetch community to stand by their favorites. It also eased some of its platform service fees, and stepped in to help with fulfillment.

No matter what businesses are selling and to whom, the pandemic is reshaping retail, and will for months to come. And we’re betting that as consumers head back to more “normal” shopping -- whatever that means -- they won’t forget what made them fall for brands like Farfetch.