Surprise Byproduct Of Pandemic: A Reprieve For Broadcast TV 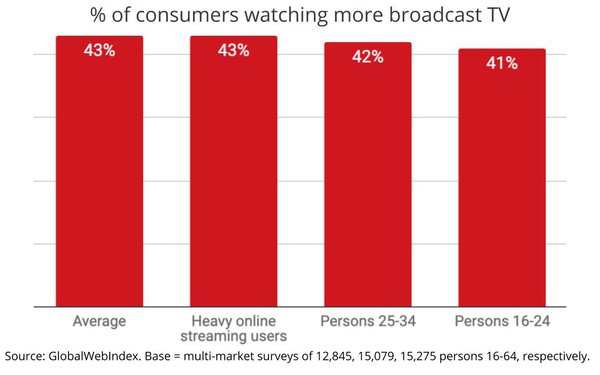 As consumers begin shifting from an initial crisis phase to a more “normal” and sustained period of the COVID-19 pandemic, analysts are beginning to project some of the longer-term effects on media. After months in which many consumers were staying-at-home, there has been one surprising and unanticipated change in their media habits: a spike in use of linear broadcast TV.

“It’s consistent across different age groups,” says Virna Sekuj, strategic insights manager of market researcher Global Web Index, which previewed findings from its third extensive wave of pandemic research to the press late Tuesday and concluded it is contributing to “a revival of broadcast TV.”

The study, which sampled more than 15,000 consumers worldwide, including the U.S., found that 43% report they are watching more broadcast TV, including younger viewers and heavy online streamers that historically index extremely low for broadcast media.

While it might be difficult to project how sustained the use of broadcast TV will be as stay-at-home restrictions ease, the experience at least created new sampling opportunities for broadcast TV outlets.

That’s the good news. The bad news is that the sampling occurred just as the official broadcast TV season is wrapping up, and networks head into rerun season with much of their new fall 2020 shows expected to be delayed due to pandemic disruptions.

Studio executives estimate as much as 60% of scripted series could be delayed because of the disruptions.

But in a another positive indicator for linear TV, albeit cable and satellite TV subscription services, new research from Civic Science indidates Americans have also “hit the pause button” on cutting the cord.

“After a steady increase in cord-cutting — that is, ditching traditional TV services for streaming platforms — in the U.S. throughout all of 2019, it seems that Americans are hitting the pause button,” the report reads, citing new research showing the percentage of Americans who are interested in cutting the cord has declined, while the percentage who are not interested has grown.

Meanwhile, the new Global Web Index data also reaffirms why consumers may be more prone toward conventional television post-pandemic, with some of the biggest increases in uses of media including more TV news, TV shows and other content (see chart at bottom). 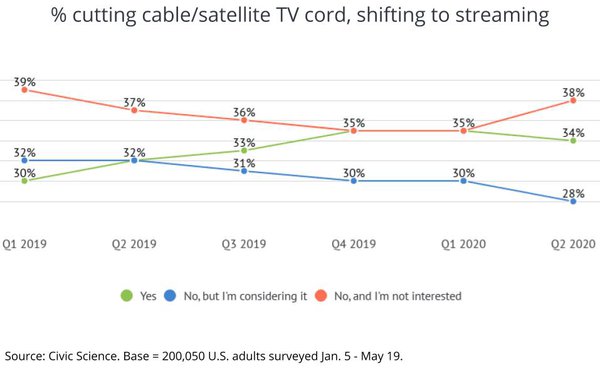 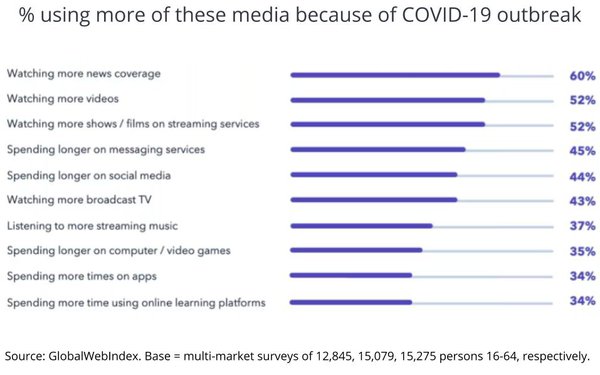