First Power Crunch Campaign: 'This Is Not A Candy Bar' 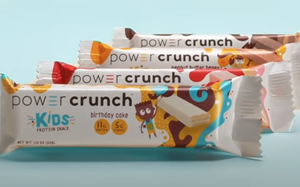 July 7: This story has been updated to reflect a change in the commercial's copy,  to “This is not a candy bar. This is protein re-imagined."

When it’s a protein energy bar that tastes like a candy bar.

Therein lay the challenge facing Power Crunch when it decided to launch its first integrated advertising campaign, titled “This Is Not A Candy Bar.”

In the late 1990s, former college football player and bodybuilder Kevin Lawrence developed a hydrolyzed whey formula that he attributes to helping his then-infant son avoid a severe case of colitis.

“That’s a pretty difficult sell,” he tells Marketing Daily. “There’s no way to inform somebody in a few seconds about all of that. And I knew that when I designed this product. So I decided to just make the best-tasting one that I could.”

Hence “This Is Not A Candy Bar,” whose target audience is females 25-45 and households with children. Power Crunch—from BioNutritional Research Group—also offers a kids version of its protein snacks.

In the 30-second commercial, the words “This is not a candy bar. This is protein re-imagined” are superimposed over various ingredients that are colliding and exploding. The visual effects were created using three robotic cameras shooting 2,000 frames per second.

“The only rule for creating food campaigns is, it must look delicious,” says Gaelan Draper, creative director at the Brooklyn-based Quirk agency. “Each shot happened in less than a second in real time.”

According to Marjorie Powers, senior vice president of CPG at media agency Stella Rising, “This Is Not A Candy Bar” is running on Hulu, YouTube, Facebook, Instagram and programmatic digital venues.

“During the launch, the video is focused in places where we combine the impact of video with the precise targeting capabilities of digital to reach our audience as they consume video content outside of traditional means,” Powers says.

According to Lawrence, Power Crunch is available in more than 60,000 retail outlets—including all big-box stores, with the exception of Costco and CVS.