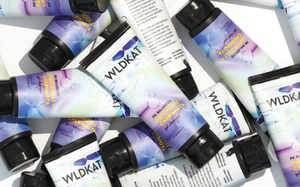 Founded last summer, Wldkat had planned to launch its creams, tonics, sprays and gels by taking over a bodega in lower Manhattan in March, for an event attended by family, friends, influencers and investors.

“We had some really exciting plans in the old world, as we like to call it,” Wldkat founder Amy Zunzunegui tells Marketing Daily.

Working with the agency Adolescent, the 14 influencers shot footage of themselves using Wldkat products in just a few weeks in such settings as bathrooms, bedrooms and backyards.

In this video, the influencers go through their daily rituals as a voiceover says, “We’re doing our thing. Staying beautiful in all the ways we do. Wldkats cannot be caged.”

Wldkat’s official launch took place on April 20, which is known to cannabis consumers as Weed Day—a nod to the fact that some of the company’s products contain broad-spectrum CBD.

“I think people, myself included, really underestimate how much time and energy and resources creating good content takes,” she says. “In fact, it’s quite difficult to do it in a relevant way that people react to.”

According to a new survey from social content company Fullscreen, 34% of people ages 18-34 say they are watching more influencer content during the pandemic, while 82% say they now have less tolerance for regular advertising.

Wldkat sells direct-to-consumer from its website now. The company is “in discussions with a couple of different retailers” for added distribution, says Zunzunegui.