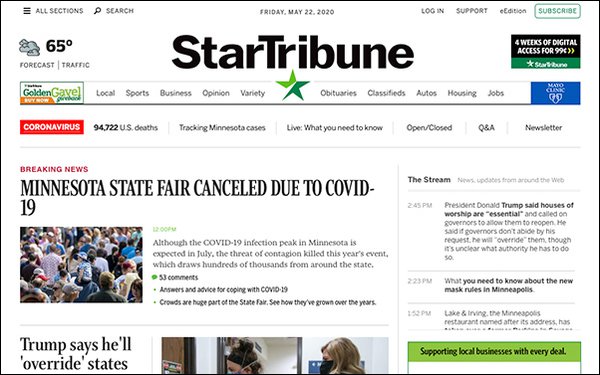 “We continue to foresee a strong future for both digital news and printed newspapers,” stated publisher-CEO Mike Klingensmith.

“We envision many more years where digital and print subscriptions, single-copy sales, and strong advertising support combine to enable the Star Tribune to play an important role in the Twin Cities and across the state.”

The company claims it was one of the first regional news organizations to charge readers for digital access, in 2011.

Since then, Star Tribune digital subscribers have grown by double-digit percentages.

Just last week, The Boston Globe announced it had hit the milestone of over 200,000 digital subscribers.

Before the pandemic, The Globe had 145,000 digital subscribers, according to WGBH.

Publishers are hastening the shift of their businesses to consumer revenue, hoping to offset at least some losses as ad revenue plummets amid the pandemic.

Yesterday, as The Atlantic announced it was cutting 17% of its staff, David Bradley, chairman-owner of Atlantic Media, said in an internal memo that the pandemic has accelerated The Atlantic’s move to a consumer strategy.