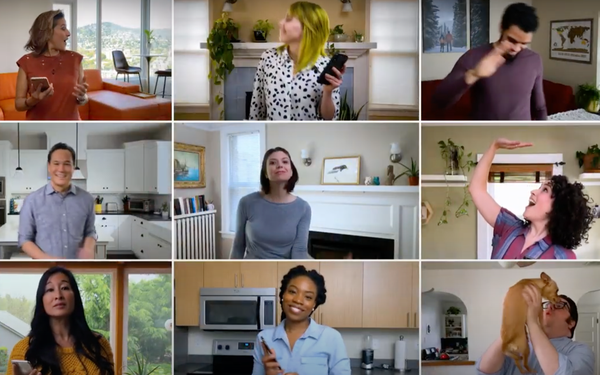 The pandemic may have Americans busy cleaning out their closets, but Mercari decided it wanted to skip the somber tone of most advertisers these days.

Its new campaign is decidedly upbeat and playful, showing people virtually high-fiving as they make money getting rid of hand mixers, basketballs and video game consoles.

Walter Hangad, marketing director of the Palo Alto, California-based recommerce platform, says the new campaign was developed after the lockdown.

“We had a big push running in the first quarter. But with social distancing, it didn’t feel as relevant,” he tells Marketing Daily. “We had to rethink our plans.”

Since all video production had stopped, ad agency Rain got creative, “dropping off lighting and props at actors’ houses -- and the actors filmed themselves,” Hangad says.

The resulting ads, with a nod to the “Brady Bunch”/Zoom grid that’s become America’s world these days, emphasize Mercari’s “everything ships, no meet-ups” model.

That's been the company's differentiating feature since launching in the U.S. in 2014. (The company started in 2013 in Japan, and the flea-market app has made it a tech powerhouse there.)

While the whole trend toward recommerce and the circular economy was already established, Hangad says the current era of “quaran-cleaning” is sparking big increases in volume

Ads are running on  linear TV, OTT and digital video, including HGTV, AMC, “Jimmy Kimmel Live!” and “The Tonight Show.”

Trapped at home, consumers have gone all in for fitness and exercise equipment, up 607% compared to pre-pandemic levels; toys and collectibles, up 574%; and video games and consoles, up 437%.

About 45 million people have downloaded the Mercari app since its launch, which has about 4.1 million active users., with roughly 150,000 new listings a day. Users are more likely to be female, Hangad says, and more suburban than urban, with young kids.