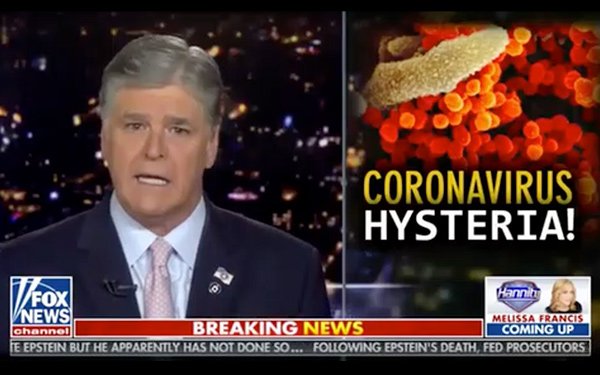 Siding with Fox News, a judge in Washington state has thrown out a nonprofit's lawsuit accusing the cable channel of violating a consumer protection law by allegedly spreading false information about the COVID-19 pandemic.

The decision comes in a lawsuit brought last month by the nonprofit Washington League for Increased Transparency and Ethics. The organization alleges that comments made on March 9 by Fox personalities Sean Hannity and Trish Regan deceived people about the pandemic, in violation of a state consumer protection law.

A video clip of Hannity's program from that date shows him saying he “didn't like how we're scaring people unnecessarily” about the virus. “I see it, again, as like, let's bludgeon Trump with this new hoax,” he said.

Fox argued that the statements reflected the news commentators' opinions -- which are protected by the Constitution.

The cable channel added that even if the commentators' statements could be viewed as “factual” -- as opposed to opinionated -- they would still be protected by the First Amendment.

WASHLITE urged McDonald to allow the case to proceed, arguing that cable broadcasters aren't protected by the First Amendment to the same extent as newspapers or over-the-air broadcasters.

McDonald rejected that position. “These assertions do not hold up to scrutiny,” he wrote in Wednesday's ruling.

McDonald discounted that argument as well. “The law on this issue is more nuanced than suggested by WASHLITE,” he wrote.

He pointed to a 2012 Supreme Court decision striking down the Stolen Valor Act -- a federal law that made it a crime to lie about military awards. Justice Anthony Kennedy wrote in a plurality opinion that the First Amendment prohibits content-based restrictions on speech, unless it falls into certain historic categories like perjury or defamation.

McDonald wrote that WASHLITE didn't explain how the statements at the center of its lawsuit could fall into the categories flagged by Kennedy.