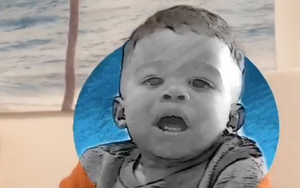 Above: An entry in the contest using the AR face filter.

When the charcoal and blue Gerber Baby brand image was born via a 1928 contest, using augmented reality wasn’t an option for entrants. But this year, it definitely was.

For the 2020 Gerber Photo Search, people were encouraged to transform their baby’s face into the brand’s iconic logo by using a specially created AR face filter for Instagram and Facebook phone apps called Anything For Baby.

Gerber was attracted to AR as “a companion piece to the annual contest, because it allowed them to ignite a much larger fan base and make more people aware of the fact that they were looking for the 2020 Gerber Baby,” says Matt Mason, chief strategy officer at the R&R Partners agency, which developed the filter.

“The concept had such amazing potential, but it had to be executed perfectly given the subject matter.”

Use-case testing of the filter was aimed at providing a seamless experience for users that took into account a wide variety of potential environments, lighting and the possibility that there could be more than one baby in a particular shot.

“The other challenge was this logo was conceived close 100 years ago and was hand drawn in charcoal pencil,” says Mason.

“So you have to somehow recreate that look with modern technology so you can basically turn the baby into a sketched drawing with a blue circle around it. That takes a lot of work to think through.”

An example of the filter in action can be seen on Gerber’s Instagram account, which has some 450,000 followers.

Given large investments in the developer tools that facilitate AR by Apple, Microsoft and other companies, Mason predicts its use by brands will continue to grow.

“I would say in the last year or so it’s gone from very progressive brands with large budgets considering dabbling in the platform to very established brands with much wider demographics, largely because it’s very efficient. The right filter to the right audience is going to have really wide adoption.”

The 2020 Gerber Baby is Magnolia Earl, the first adopted child to win the designation.