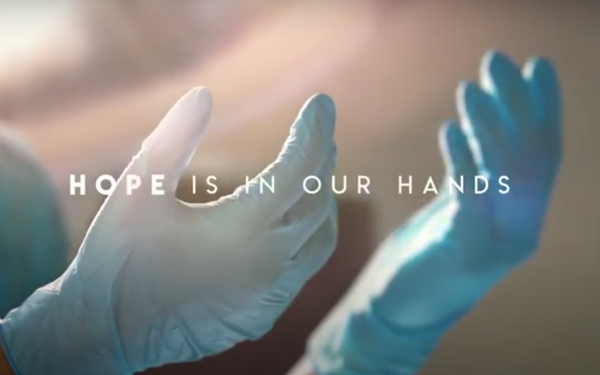 Advertising amid a backdrop of the pandemic is a tough proposition.  Many of  the ads that touch on COVID-19 have a similar theme, a similar rhythm, even similar music.

And “during these uncertain times” many of them, no matter how sincerely they are meant, sound trite with repetition.

A new ad for Dial soap could have ended up that way, too, but its simple message is probably helped by the product itself.

The spot groups together shots of famous hands at work -- among them, Elvis stumming his guitar, Muhammad Ali delivering an uppercut, and Rosie the Riveter’s closed fist showing the resolve of women factory workers during World War II.

In the last moments, we see the two gloved hands of a medical worker, with copy that reads, “Hope is in our hands. Together, there’s nothing they can’t do.”

The ad ends with the message that Dial has been “caring for hands for over 70 years.”

Because human hands have rarely been thought about as much as they have for the last four months and because Dial is in the hand-cleaning business, it’s an ad that makes its  touchy-feely point, and also a soft sell for the brand itself.

Randi Melton, vice president of body care for Dial’s parent, Henkel Corp., says the goal was simply just to “reinforce that Dial has been around for over 70 years. What we knew we wanted to do was simply focus on hands.”

She was well aware of criticism of some of the existing COVID-19 ads, so “We wanted to make sure we were very much differentiated from what’s out there.”

Indeed, the commercial doesn’t make any special claims but promotes the importance of good hygiene and lets the viewer connect the dots.

It’s an ad Dial could run at any time, though Melton, with a little prodding, says that as civil unrest has flared nationwide, the “together” tagline, quite by accident, also makes a new, separate statement.

The ad debuted May 19 on television and social media and was created by TBWA/Chiat/Day NY in just about a month’s time.

Dial is also encouraging followers on Instagram and Facebook to contribute photos via the #IWashMyHandsFor hashtag showing how much they care for people around them.