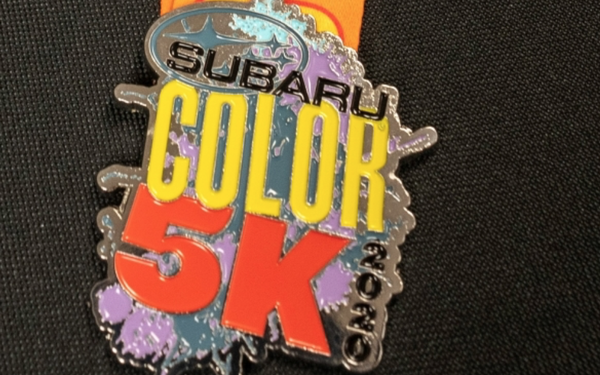 Subaru of Indiana Automotive is going virtual this year with a mobile app that will allow runners to complete the sixth annual Subaru Color 5K.

The in-person event joins many others in being cancelled due to the need for continued social distancing measures due to the pandemic.

The first 600 participants to complete the race between June 13 and July 12, which is open for registration, will receive a finisher medal by mail. Subaru of Indiana Automotive, a subsidiary of Subaru Corp., is the home of North American production for the Ascent, Impreza, Legacy and Outback.

The event has traditionally been hosted on the company’s grounds where participants have been showered with colored powder at stations along two available courses. With this year’s virtual format, participants can select the 5K route of their choosing or run on a treadmill.

Last year's event attracted nearly 550 participants and raised $52,000 for Special Olympics Indiana. Since its inception, the Subaru Color 5K has raised nearly $190,000 in support of the organization's year-round training and competition for children and adults with intellectual disabilities.

In addition to registering, participants can use the website to recruit family and friends to join their team or make a contribution. Sponsors for this year’s event include the Subaru of Indiana Automotive Foundation, CTI Personnel and Bob Rohrman Subaru.

Runners and walkers are encouraged to download the IYR Virtual mobile app to track their race. The app will automatically stop when the selected distance is reached and submit the results. Those who do not wish to use the app may submit results manually.

While Subaru of Indiana hopes to return to a live event next year, this year’s event has already attracted participants from other states who wouldn’t otherwise be able to join in person, says Craig M. Koven, communications and external relations manager at Subaru of Indiana.

“We decided to move forward with this year’s Subaru Color 5K in a virtual format to maintain momentum for the annual event and keep it in the community’s consciousness during these unusual times,” Koven tells Marketing Daily. “Even more importantly, we wanted to continue providing some level of support for Special Olympics Indiana. While many nonprofits haven’t been able to hold their traditional fundraisers, going virtual allows us to still provide much-needed financial assistance.”