Conversations About Trump Turn Increasingly Negative, Even Among Base 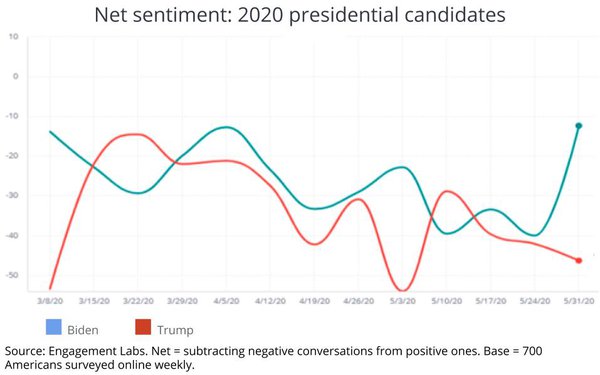 The gap in sentiment between social media conversations about 2020 candidates Donald Trump and Joe Biden expanded to 34 points after the first week of protests related to the killing of George Floyd by police officers in Minneapolis, marking the largest gap since Biden became the presumptive nominee of the Democratic Party.  Both candidates ended May in net-negative territory, but Biden was at just -12 versus -46 for Trump.

The net sentiment of these every day, offline conversations is important because the defeat of Hillary Clinton was predicted when her net sentiment dropped below Trump’s after the release of the James Comey memo prior to the 2016 election, as reported in the Huffington Post and in Clinton’s book, What Happened.  Whereas social media conversation is of questionable predictive value because it is “totally unrepresentative of America,” according to the New York Times, word of mouth is far more representative and predictive.

The shift against Trump in late May was driven mainly by Republicans, whose net sentiment for Trump fell from +49 to +28 the last week of May. Although traditional polling continues to show high enthusiasm among his base, the shift in Republican conversations  are a potential precursor to changes in voting intent, and thus represent an early warning sign for the Trump team.

Even prior to the Floyd killing, and its aftermath, the President’s handling of the COVID-19 pandemic was driving Republican criticism of Donald Trump. For the eight weeks ending May 31, a majority of Republicans talking negatively about Trump (66%) were sheltering at home due to the pandemic, a larger share than Republicans nationally (52%) who reported staying completely or mostly at home. Also, 29% of Republicans talking negatively about the president were from the Northeast—the region hit hardest by the pandemic—much higher than the share of Republicans overall living in the Northeast (19%). 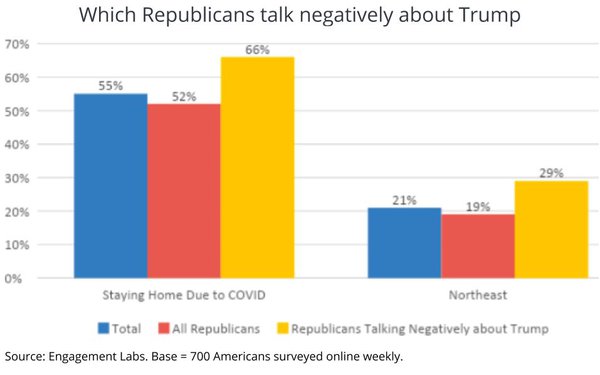 The daily conversations of these Republicans are revealing as well. Republicans talking negatively about Trump were far more likely than all Republicans in April/May to be talking daily about the President’s performance (64% vs. 34%), about major health issues such as COVID-19 (66% vs. 55%), and “concern” about their own “financial situation” (41% vs. 29%). 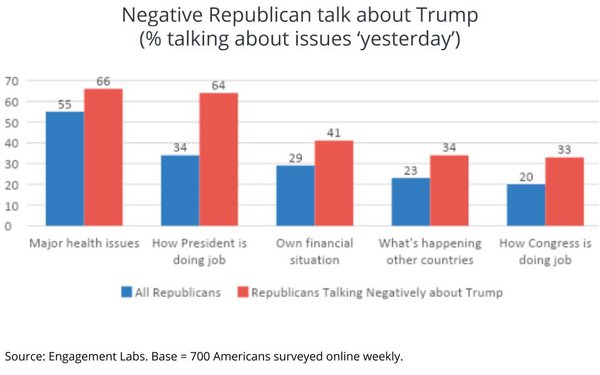 The presumptive Democratic nominee for President, Joe Biden, also has word-of-mouth problems.  Mostly out of sight since the start of the pandemic, he was the subject of daily conversation among just a quarter of the public in April and May, versus half who were speaking about Trump each day.  Among Democrats, the talk level has been higher (33%), but 40% of those Democratic conversations in May were negative. 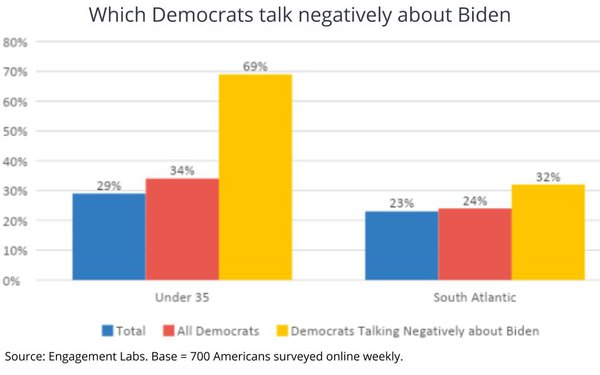 The issues that stand out among Democrats talking negatively about Biden do not point toward a defining problem, like the pandemic, as in the conversations of Republicans toward Trump. The issues with the biggest gaps between Biden’s Democratic critics and all Democrats include President Trump’s job performance, “nutrition and healthy eating,” schools/education, the job performance of Congress, and “issues of concern to women (pay equity, women’s health issues, etc.).” 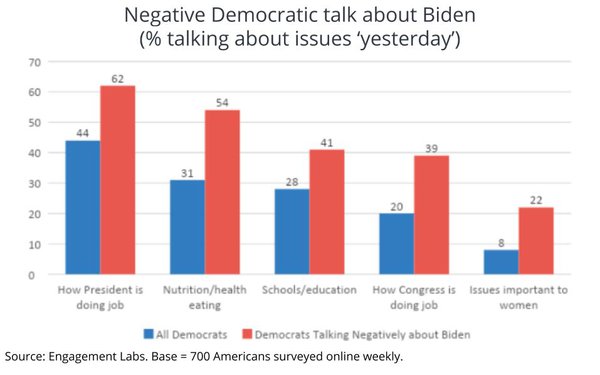 One thing that unifies Republicans and Democrats alike is that large percentages report that their “most impactful” conversation of the day prior to taking the survey involved being scared and confused.  That was the number-one emotion expressed in Democratic conversations (at 34%), and number-two for Republicans (at 30%), behind “Happy” (36%).

As we have documented in 2016 and since, everyday conversations are leading indicators of preferences and behaviors. Changes in these conversations—nationwide, and among key subgroups—are important signals. By carefully monitoring conversation trends, campaigns have an opportunity not only to anticipate the future, but also to influence it by identifying key groups of voters that are advocating for or against the candidates, and developing messaging strategies that will resonate and become a part of their political discourse.