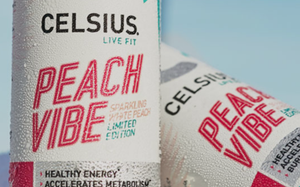 “Where there’s disruption, there are opportunities.”

With those words, Celsius Holdings CEO John Fieldly isn’t just talking about the impact of the pandemic on CPG purchases. They also apply to the day-to-day dynamics of the beverage distribution ecosphere.

Performance energy drink Celsius has dealt with both issues in recent months.

While its gym and fitness club exposure has been put on hold, Celsius launched in more than 1,500 Walmart stores in its fiscal quarter ended March 31—a period in which North America revenue rose 70%, to $19.4 million.

At the end of April came the news that competitor Bang Energy would shift its retail distribution exclusively to PepsiCo. That left Bang’s previous distributors with a big void to fill, while handing Celsius a big opportunity.

In this Q&A, Fieldly talks about shifting the brand’s marketing approach to online events and its timing-is-everything initiative to sponsor the energy drink aisles on Instacart several months before COVID-19 made a big impact on shopping habits.

CPG FYI: What kind of live events had you done before the pandemic imposed social distancing?

John Fieldly: We had gone coast to coast in key markets with our Live Fit Tour, creating an emotional offline activation, and also online. For example, in New York City we did a Union Square workout and integrated it with local gyms and health clubs. Unfortunately, we had to stop that in 2020.

CPG FYI: What did you then?

Fieldly: We became the official energy drink sponsor of the Barry’s Bootcamp live, at-home series on Instagram. Barry’s is a huge partner. We also launched the virtual workout platform Sweat With Celsius on our Instagram account. It’s live every Monday, Wednesday and Friday, with local trainers doing a variety of workouts.

We wanted to help the local community, which is in really tough times as you know. The gym channel is completely closed. So we started targeting individuals in our markets who could come to Celsius on Instagram and hopefully expand their consumer base and maybe gain some new clients when we get to the other side of COVID.

CPG FYI: How did the Bang distribution deal with PepsiCo help Celsius?

Fieldly: When there’s disruption, there are opportunities. Bang was running a lot of volume through a lot of distributors like Anheuser-Busch InBev, MolsonCoors and others. They have to pay for their trucks and their payroll, so they still need that volume and that margin coming in. A lot of them are seeing Celsius as a great opportunity to help fill that void.

CPG FYI: Why did you decide to pursue a marketing relationship with Instacart last September?

Fieldly: We were trying to get in front of the shift in consumer shopping patterns. We worked on a pilot program with Instacart that ended up going live in March, which was the sponsorship of their energy drinks aisles. Now, as we all know, COVID has exacerbated the growth in these types of platforms and services. We were a little bit ahead of the curve on that one.

Fieldly: Rodney Sacks, who is the chairman of Monster Energy, on the company’s first quarter earnings call reported that Celsius is the third-largest on Amazon within the energy drink category. So you’ve got Monster, Red Bull and then Celsius. That was great to see and great to hear.