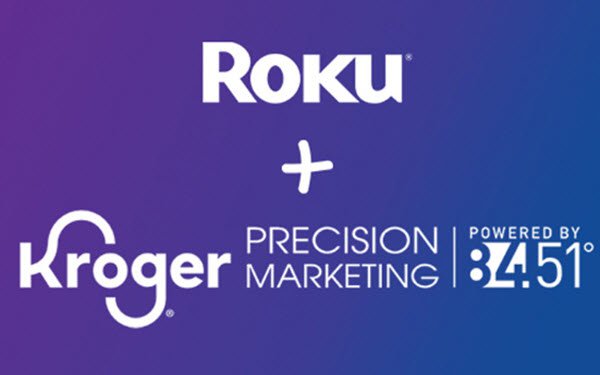 OTT giant Roku and America’s largest supermarket chain, Kroger, have teamed to offer CPGs what promises to be a powerful new option for linking ad spending directly to in-store and online purchases.

Integrating KPM’s analytics capabilities — and Kroger’s customer data on 60 million-plus households from its nearly 2,800 supermarkets — will give CPGs access to closed-loop attribution for measuring campaign performance across the Roku platform, as well as tools for measuring linear TV ad effectiveness.

The linear TV tools are based on Roku’s licensed TV operating system, which is North America’s largest.

Marketers will be able to use the program for campaigns spanning Roku’s hundreds of ad-supported platforms, and link ad exposure to actual sales.

The new shopper data program “will make it easier and more effective for CPG advertisers to shift spend to streaming and focus on value for every ad dollar spent,” says Alison Levin, Roku’s vice president of ad sales and strategy — adding that Roku believes that the TV ecosystem is on its way to a point at which all ads will be targeted and measurable.

Certainly, the new offering — KPM’s first move into OTT — represents another step forward for CPG marketers eager to employ OTT at scale to reach younger viewers, in particular, as traditional TV viewership declines over time… and measure performance precisely while doing so.

For example, KPM can help marketers segment messages to high-volume category buyers, customers who occasionally buy a category, or those who buy a complementary category.

Kroger — along with Walmart and Target — has been rapidly ramping up its customer data-driven media offerings to better compete with Amazon for CPG ad dollars.

In February, Kroger achieved a major milestone when it launched an attribution program that allows brands that use KPM and its self-service ad platform to track brick-and-mortar and online sales across Kroger properties.

Meanwhile, Roku is busy expanding and enhancing its own AVOD offerings to grab ad share from linear TV and Amazon.

Last month, Roku announced that it’s integrating DSP operations into a new buying/management advertising service, OneView. That service is leveraging TV identity data from the company's U.S. streaming platform to manage advertising across OTT, desktop and mobile campaigns — reaching an estimated four out of five U.S. homes, according to the platform.

And last week, Roku added 30 more ad-supported channels, to bring its total to more than 100, along with a new live-TV navigation guide.

Roku has been giving ad presentations for verticals, including CPG — and plans a NewFront presentation on June 22.

All in all, this Roku/Amazon tie-up is a notable advancement in the evolution of brands tapping OTT’s potential and hard performance metrics.