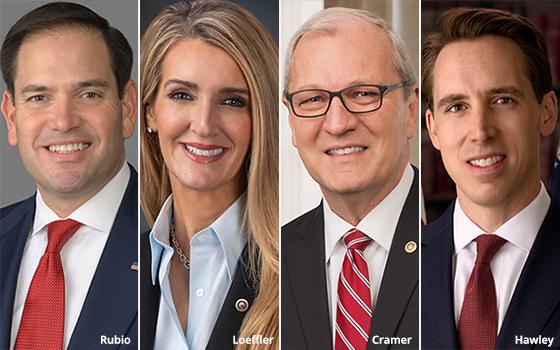 Digital rights groups and the ad industry view President Trump's recent order regarding social media as a threat to the First Amendment.

“Social media companies have become involved in a range of editorial and promotional activity,” Sens. Marco Rubio (Florida), Kelly Loeffler (Georgia), Kevin Cramer (North Dakota) and Josh Hawley (Missouri) write to Pai. “Like publishers, they monetize, edit, and otherwise editorialize user content. It is time to take a fresh look at Section 230 and to interpret the vague standard of 'good faith' with specific guidelines and direction.”

They are urging Pai to "clearly define the framework under which technology firms, including social media companies, receive protections under Section 230."

The letter comes nearly two weeks after Trump issued an order that aims to task regulators with reinterpreting Section 230. That law protects web companies including Twitter, YouTube and Facebook from lawsuits based on material posted by users. Trump specifically wants regulators to craft regulations that could tie websites' legal protection to their content moderation policies.

Currently, websites are immune from suit based on users' posts -- even when the sites promote or delete material.

In a landmark 2011 ruling, New York's highest court ruled that website operators can't be sued for libelous posts submitted by users, regardless of whether those posts are edited or promoted by the site.

Courts have also repeatedly ruled that websites have a First Amendment right to highlight or take down posts, photos, videos and other content uploaded by users.

But the GOP lawmakers appear to argue to Pai that web platforms should lose their immunity for performing editorial functions, including moderating content.

“While social media companies enjoy their special status under Section 230, it is questionable that they are living up to their obligations when they blur the lines between distributor and publisher by favoring one political point of view over another,” they write.

In fact, Section 230 does not distinguish between “distributors” and “publishers,” according to Santa Clara University law professor Eric Goldman, who has written extensively on the subject.

On the contrary, he says, Section 230 actually abolished a distinction that previously existed between online distributors and publishers.

“It's a sign of how grossly the authors misunderstand or misportray Section 230 that they embrace the precise legal distinction that Section 230 was designed to eliminate,” Goldman tells MediaPost.

The lawmakers aren't the only ones who may be misinterpreting the statute, according to U.S. Naval Academy law professor Jeff Kosseff, author of the book about Section 230, The 26 Words That Created the Internet.

“There is a huge misconception that Section 230 protections disappear if a platform moderates content,” Kosseff tweeted this week. “Congress passed 230 to prevent platforms from increasing their liability due to editing user content.”

Other legal experts have noted that Congress never empowered the FCC to pass regulations implementing Section 230, and that the agency itself has acknowledged it doesn't regulate website operators.

The digital rights group Center for Democracy & Technology sued last week to block the order's implementation. The Association of National Advertisers also criticized the order as "misguided," and stated it violates the First Amendment.

“Without Section 230, sites would have strong incentives to go one of two ways: either sharply limit what users can post, so as to avoid being sued, or to stop moderating entirely, something like 8chan -- now operating under the name 8kun -- where anonymous users can post just about anything and speech supporting racism and sexism is common,” he wrote. “I think we would be vastly worse off in either scenario.”

Wyden added that without Section 230, websites likely wouldn't allow users to post anything that could potentially be defamatory -- such as videos showing police acting violently.

“The cellphone video that captured the officer kneeling on George Floyd's neck spread across social media platforms -- and it's the reason Americans learned about his unjust killing in the first place,” he wrote. “In a world without 230, I cannot imagine that Facebook or Twitter would allow posts about police violence that could possibly be defamatory.”