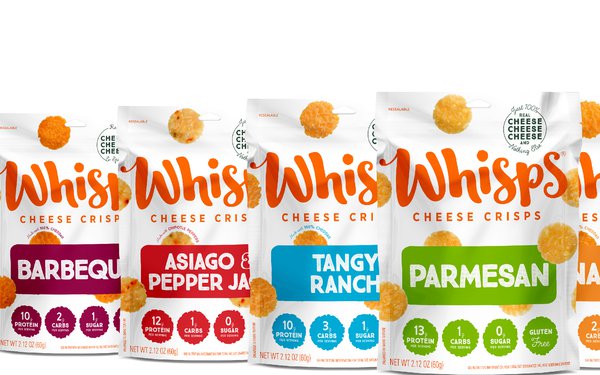 For many Americans, National Cheese Day went largely unnoticed on June 4. Not so for the folks at Whisps.

Made with 100% pure cheese—along with spices in some variations—the Whisps snack brand was launched in 2015 by fourth-generation artisanal cheese company Schuman Cheese. At the time, cheese was mainly just cheese, and crispy snacks were crispy snacks.

A year ago in April, Whisps was sold to Kainos Capital—with Schuman retaining a stake in the brand—after Schuman came to realize Whisps needed to be on its own to reach full potential.

In this interview, Whisps CEO Ilana Fischer, who was executive vice president during the launch at Schuman, and senior vice president of marketing Katie Nahoum talk about the recent brand refresh that focuses on flavors over ingredients, along with Whisps’ marketing tactics and its first $1 million-plus month of sales on Amazon.

Fischer: At that time, the idea of a pure cheese snack was still pretty niche. We launched this product thinking it would give our cheese sales team another item to sell into cheese buyers.

We were having these meetings with buyers and trying to convince them this was an item worth carrying. Some were saying “we don’t think anybody would like this. People don’t want cheese that’s not refrigerated.” We got a whole bunch of pushback.

CPG FYI: So the naysayers turned out to be wrong?

In 2018, we realized this product was big enough and unique enough that it really deserved its own team and attention.

So rather than do a battle for resources at Schuman, it was decided to sell the business. Schuman still owns a good percentage of it, but now we’re running completely independently.

CPG FYI: Your 2020 brand refresh emphasizes “fun and fancy” packaging and flavors rather than nutritional ingredients. Why is that?

Nahoum: The thing to keep in mind is that we sit in the salty snack cheese category, which is pretty ubiquitous and widely consumed across America. We wanted to make sure we understood who our current customer base was in order to be able to drive insights for the rebrand. What came out of that learning was that consumers are looking for flavor.

By nature of having a single ingredient, we were able to harness the health benefits of high protein, low carbs, zero sugar, gluten-free and keto-friendly. But people were really shopping based on “is this Parmesan or cheddar, Asiago or pepper jack?”

One of the biggest things you can see is the shift in how we attached cheese crisps to the brand name and let the flavor name stand out as the prominent hero item on the packaging.

CPG FYI: What has your marketing consisted of to date?

Nahoum: Prior to 2019, there was fairly little done from a marketing perspective. We started testing various tactics in Q4. Heading into 2020, we’ve increased our social advertisements by four X. We began spending on Amazon in September of last year and actually had a seven-figure sales month in April.

With search and SEO, we’ve been learning quickly, and there’s tons of opportunity still to be had in those channels. We also did some digital advertising retargeting and prospecting and are awaiting those results.

CPG FYI: How has your marketing changed with the onset of COVID-19?

Nahoum: Previous to the pandemic, we had over a quarter of our budget earmarked for experiential and field sampling. That’s an important piece of our business because the taste is so great. But the means of reaching consumers physically is really limited right now.

Fischer: We like to invest in displays in stores because we know that when people see Whisps, they’re very likely to buy Whisps. Our biggest challenge is just getting noticed in the sea of products.

We are now trying to figure out how best to merchandise ourselves on the digital shelf and jump off the page with the same level of creative execution that we demand in stores.